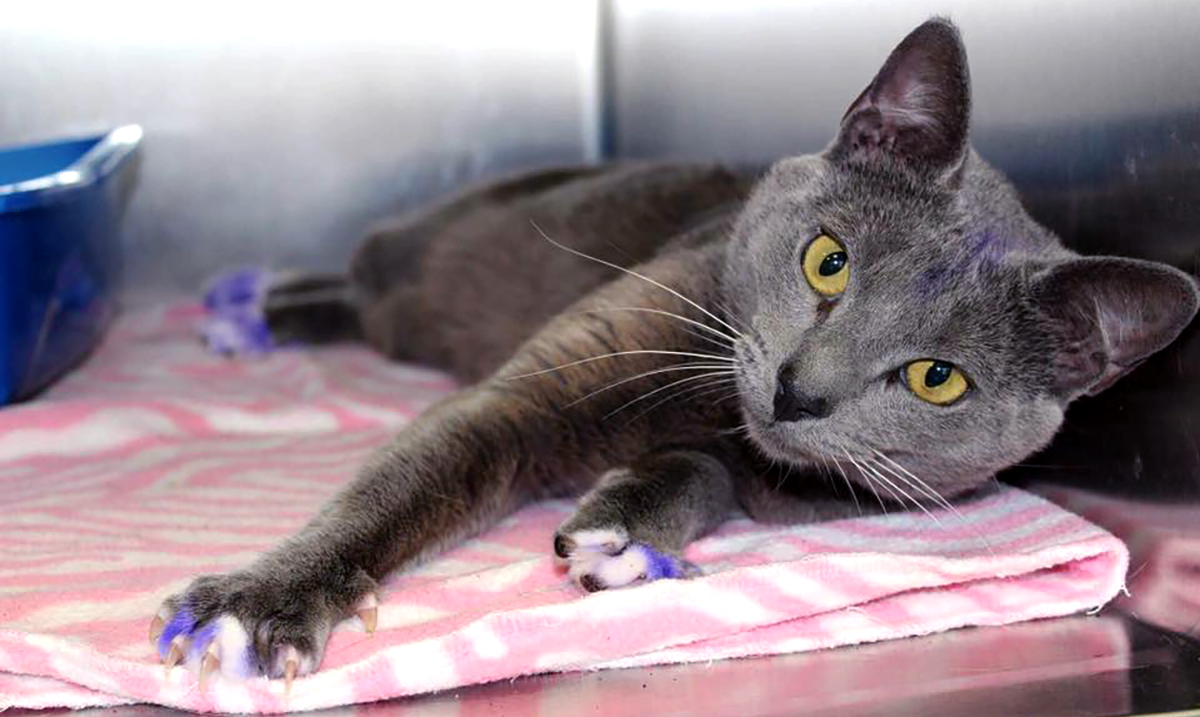 If You See A Cat With Purple Paws, It Might Really Need Your Help

Just a few years ago a cat was found with purple paws and while it was quite cute the potential reason behind it was quite sinister. Sure, most people assume a little color is fine for the animal but it might not be as simple as that, to say the least.

A cat rescue worker who had the precious cat mentioned above show up at her shelter was quite devastated upon really giving thought to why his paws were purple. While he was in relatively good health his white bits had been marked with a permanent marker which is something she claims dog-fighters do to keep bait animals identifiable before being thrown into the ‘ring.’ Apparently, dog fighters use markers to color the white parts of cats and kittens, so they can bet on which color will die first.” This is something we’ve heard before as two kittens were found in 2016 and taken to the Bradford Cat Watch Rescue Center that had been covered in permanent ink.

According to the Dodo, the cat with purple paws was taken to the Naples Cat Alliance and placed in the care of Megan Sorbara. She told the Dodo that ‘he could have been a cat who was owned, but they were just letting him free-roam’ and then that he was possibly picked up by these dog fighters and somehow managed to break free just in the nick of time. She also said she could not imagine that he was handled nicely by those who marked him but that she also did not know what kind of past he had before all of that potentially came about.

Her rescue page posted photos of him with a caption going over the potential that he was to be used as bait and working to help warn others. Within that post, it was noted that he was being referred to as Mr. Purple Paws at the shelter and was doing well. You can actually read the post for yourself below.

While not all cats or kittens who happen to be ‘painted’ are being used for bait, it is as many have suggested very possible that in some cases children are merely having their ‘fun’ but either way, it should also be known that permanent ink can cause serious damage to cats and kittens. Sure, it might look ‘cute’ but if someone uses permanent ink to ‘paint’ or ‘mark’ their kittens or cats for any reason it could cause damage to their internal organs. Permanent ink is toxic and because cats lick their fur to clean themselves they are ingesting that poison without a second thought.

What do you think about all of this? I for one think it is quite heartbreaking and while we might downplay dog fighting a lot here in the US and pretend it isn’t happening, it is very present in our country, and we need to be working to be more aware of it and the signs that it could be happening near us. Taking a stand for these animals is the least we can do and something we should all be willing to do.

If you happen to come by a cat or kitten that has some kind of marker coloring on it taking it to the shelter could save its life because there it can get the help it needs regarding the damage that can come and also the potential to be used as bait is also removed since it is no longer out on the streets. Would the few minutes it takes to do that really be a big deal? Something so simple can really change or save a life.