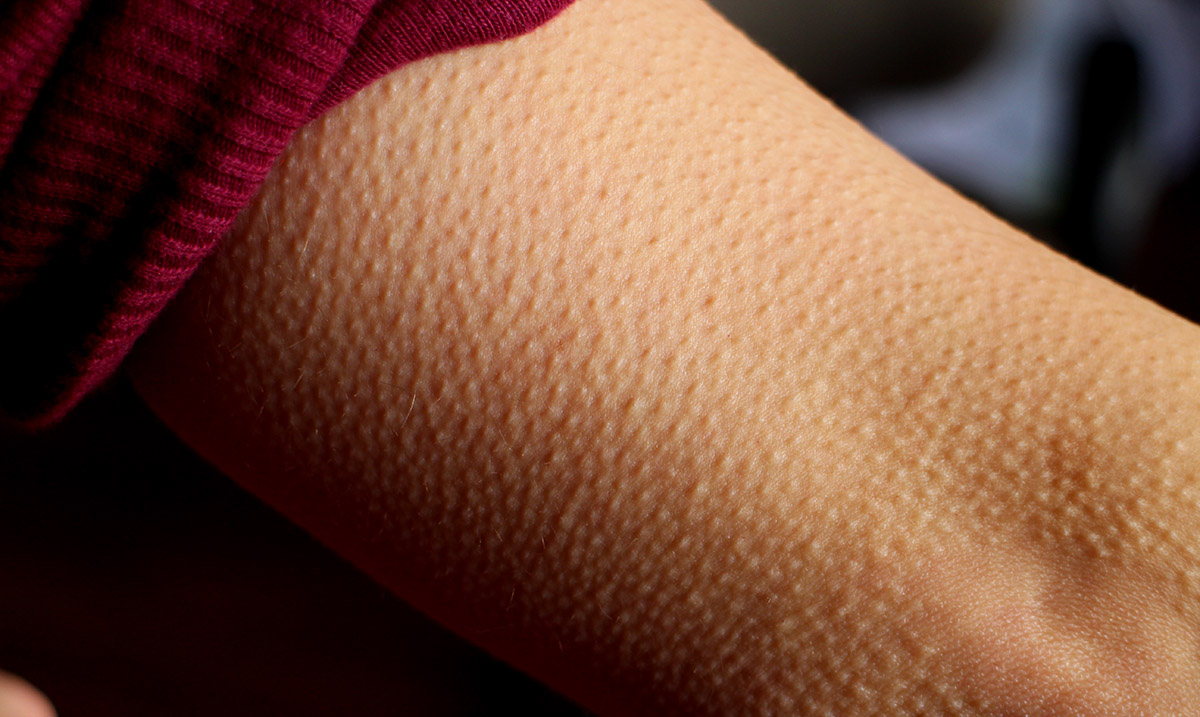 If you have ever listened to a song that truly made you feel something, then chances are you got goosebumps. I know this has happened to me on multiple occasions.

Somewhere around half of the population has this reaction to their favorite music. Yet, for some time, the reason for it has been debated on. However, just in 2016 research was published that might finally give us the answer. The study was performed by Mathew Sachs, a former undergraduate at Harvard.

The reactions are known as frissions or an aesthetic chill also sometimes called a “skin 0rga$m,” Mitchell Colver wrote for ‘The Conversation. These are usually associated with music but can also happen when watching a movie.

Why do we get chills? The chills is a sensation we get when we’re cold. It doesn’t really make sense that your hair would stand on end, or that you’d get these goosebumps in response to music,” Matthew Sachs, an author of the paper, told Sample. “We think that the connectivity between the auditory cortex and these other regions is allowing music to have that profound emotional response in these people. It’s very hard to know whether this is learned over time, or whether these people naturally had more fibers. All we can say is there are differences that might explain the behavior we see.”

Researchers found that the brains of individuals who occasionally feel a chill while listening to music were wired differently that the control subjects. They had more nerve fibers connecting the auditory cortex, the part of the brain that processed sound, to their insular cortex, a region involved in processing feelings. The auditory cortex also had strong links to parts of the brain that could monitor emotions.

Colver, who has studied the phenomenon, says that previous research shows the ability to experience frission is related to a personality trait called ‘Openness to Experience’. But his research suggests that the people who experience chills while listening to music weren’t always those having a deep emotional connection. Instead, his study showed that people engaged in the music more intellectually, like trying to predict a song melody or putting mental images to the music. We are more likely to get a shiver when the music deviated from their expectation in a positive way.

For this research, he had 20 students go into the lab with a playlist of their favorite music. They then had their brains monitored through a brain-scanning technique known as diffusion tensor imaging (DTI). This shows how different regions are and how good the neural communications are between them.

Sachs discovered that those who managed to make the emotional and physical attachment to music have a different brain structure than those who do not. The findings, which were published the journal Social Cognitive and Affective Neuroscience, showed that they had/have a denser volume of fibers that connect their auditory cortex and areas that process emotions. In other words, they are able to connect with music on a much deeper level than the group who did not get chills. It appears that because these fibers are thicker than average, it gives them an increased efficiency.

If you are someone who gets chills from music, then you are more likely to have stronger emotions than other people. While this study was a small one it was still quite informational. In doing this research, Sachs hopes to learn what neurologically causes these reactions. He believes that in time these reactions could tap into some sort of treatment for psychological disorders.

Not everyone is so enthusiastic about the idea of discerning beauty from brain scans. Philip Ball wrote for Nature News: “Although it is worth knowing that musical chills are neurologically akin to the responses invoked by se* or Dr*gs, an approach that cannot distinguish Bach from barbiturates is surely limited.”

Sources used in this article: