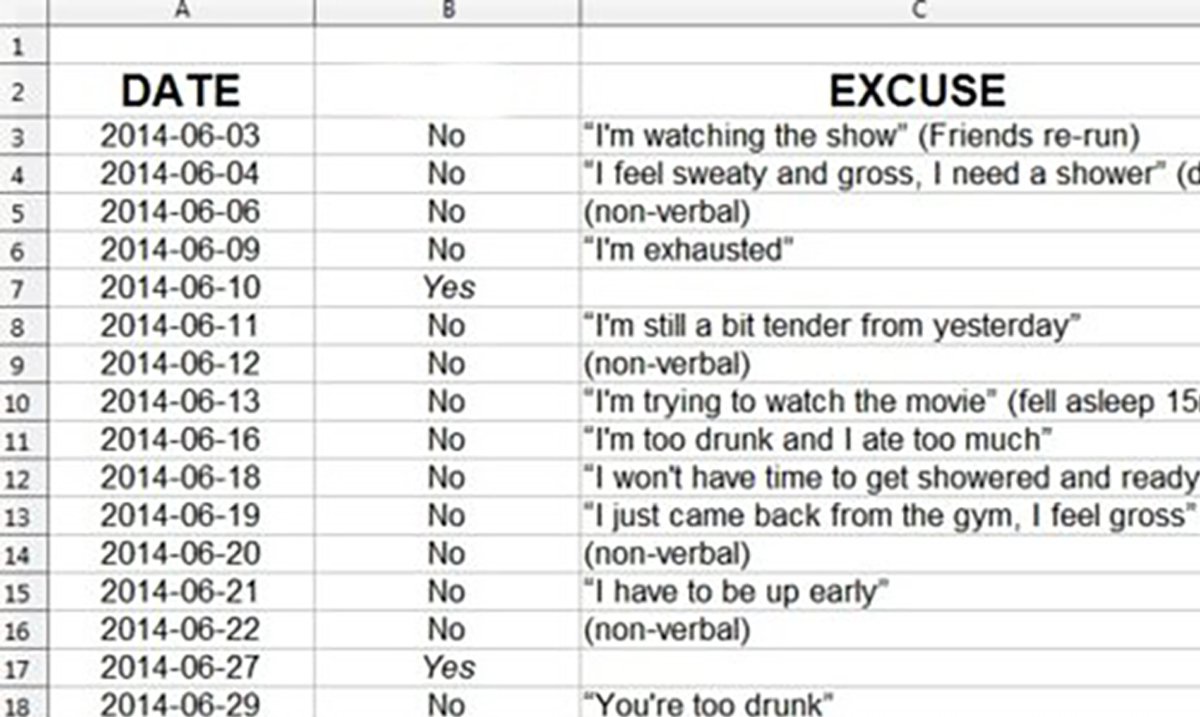 To say that relationships can be complicated is an understatement. And while relationship problems can be difficult, this situation is on a whole other level.

Reddit is a great forum site that covers a wide range of topics and personal accounts, including love. Admittedly, some of them seem kind of crazy, but in this one, the writer included photo evidence.

In relationships, $ex and intimacy start hot and heavy, and over time, it can start to dwindle for several reasons. One Reddit user throwwwwaway29 took to Reddit to share her experience with this. And you will not believe what her husband did in response to their dwindling love life. According to throwwwwaway29,

“My husband [M26] and I [F26] have been together for 5 years, married for 2 of those years. We just bought a house 5 months ago. No kids yet. Our lives have been crazy busy though. We spent all spring renovating our new house. At my job I was given nearly double my usual workload after some of my colleagues were laid off. I gained some weight in the winter and have been busting my ass at the gym to get rid of it.”

“Yesterday morning, while in a taxi on the way to the airport, Husband sends a message to my work email which is connected to my phone. He’s never done this, we always communicate in person or by text. I open it up, and it’s a sarcastic diatribe, basically saying he won’t miss me for the 10 days I’m gone. Attached is a SPREADSHEET of all the times he has tried to initiate $ex since June 1st, with a column for my “excuses”, using verbatim quotes of why I didn’t feel like having $ex at that very moment. According to his ‘document’, we’ve only had $ex 3 times in the last 7 weeks, out of 27 “attempts” on his part.”

“This is a side of him I have never seen before – bitter, immature, full of hatred. In person, he’d been acting normal the whole time, maybe a little standoff-ish in the last week. Completely out of left field. Our $ex life HAS tapered in the last few months, but isn’t that allowed? We are adults leading busy, stressful lives. I cook for him, I do his laundry, I keep our house clean and tidy. It’s not like our $ex life was going to be this way FOREVER, it was a temporary slow-down due to extenuating circumstances.”

“I immediately tried phoning him 3-4 times before getting on the plane – no answer. When I landed in my destination city, I tried calling 2 more times – no answer. I texted him saying we needed to talk, and he needed to call me at his earliest convenience. No response. He’s never intentionally ignored my communications before. I pretty much stayed inside my hotel all evening waiting by the phone, then cried myself to sleep.”

“It’s now morning and he still hasn’t contacted me. I am supposed to be out visiting clients for the next 9 days on behalf of my company, and I am an emotional wreck. Why is he putting me through this? What the hell am I supposed to do?”

Here is the spreadsheet.

The responses to this post came from either side. Here are a few I thought were worth mentioning.

Lol, you guys think this was an attempt for the husband to seduce OP?

The email is that of a man who is equally desperate and angry. A man who encountered so much unaknowledged rejections that he needs to count them.

Let’s put it this way, he started documenting $ex attempts 7 weeks ago. When do you think the $ex actually ‘tapered off’? I’m guessing several months before that.

I really don’t believe it was as out of the blue as OP would like us believe.

For the sake of your sanity in dealing with clients for nine days, reply back with an email. But a nice one. Even if his email was pretty lame, he is probably fearing that the past 7 weeks are not only temporary but a new way of things.

Tell him you love him, things have been crazy with all of the stuff going on, but you will work it out. And for your sake, even though you guys have a lot of stuff going on, you have to enjoy life. Make evenings together “your thing”. Make dinner after the gym but leave him the dishes while you go and take a nice shower, get into something comfortable and just relax and enjoy your night together. Watch TV, have $ex, snuggle. Married life gets busy. When my kids were little, my grandmother told me that housework will always wait for you. I always spent evenings with my kids making dinner, giving them a bath, reading to them etc. Your evenings together are as important as anything else in life, maybe more so. Cut yourself some slack, and him too. Hope it works out.

While I agree with you wholeheartedly on everything you said, this was thrown on her just as she was leaving for a business trip. It would have been better if he had sent an email or text that said “we need to talk when you get home” or waiting until she was on her way home to send this email.

Another thing that strikes me is that they don’t seem to communicate at all. I don’t know anyone that goes on a business trip that doesn’t call or text at least once a day. I know the circumstances are dictating the lack of communication right now, but it doesn’t sound like they would be looking forward to calling each other if things were otherwise”normal” for them.

If that’s true, and I have no reason to doubt it is, then I can completely understand why he is feeling unloved, bitter, and frustrated.

Not excusing his immature, passive-aggressive actions, but being denied 24 out of 27 attempts is about equal to him going no contact to you. Now you know how it feels to be unloved and left on your own. I hope that is all he is trying to convey and not out banging hookers while you are gone.

Have $ex with your husband!

But at this point, she’s trying to reach out to understand his concerns, but he’s not picking up anymore.

Sure, there are excellent ways to bring up dead bedrooms, but bringing it up in such a nasty manner and then not answering? My god, I’d be panicking at what was going on (or down!) back home!

Honestly, I can see this from both sides. But, I tend to agree with many of the commenters who voiced that there seems to be no communication. I understand where he’s coming from, but his approach leaves a lot to be desired. Perhaps if he said this person to person, and no while she was away on business, he might have gotten somewhere. What do you think?