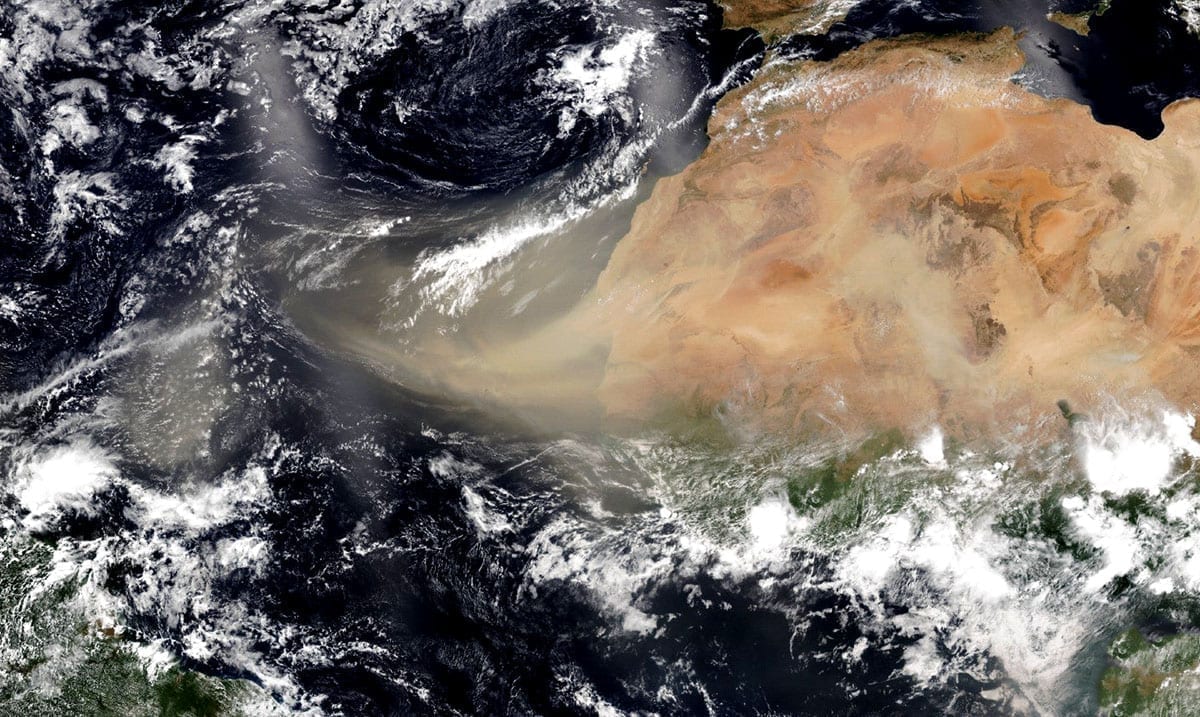 Huge Sahara Dust Cloud Headed For The US

There is a vast cloud of Sahara dust coming our way. This cloud of dust has already seemingly covered the Caribbean and honestly, it’s quite scary for a few different reasons.

Yes, it is ‘just dust’ but that dust can bring air quality down drastically and even has people in the Caribbean using air filters and staying inside. While we don’t see things like this often, it’s important to be aware of and while it might not reach us here in the US it is headed our way. Considering the things we’re already facing, this on top of it makes matters much worse.

ABC 7 reported as follows on the topic:

Extremely hazy conditions and limited visibility were reported from Antigua down to Trinidad & Tobago, with the event expected to last until late Tuesday. Some people posted pictures of themselves on social media wearing double masks to ward off the coronarivus and the dust, while others joked that the Caribbean looked like it had received a yellow filter movie treatment.

José Alamo, a meteorologist with the U.S. National Weather Service in San Juan, Puerto Rico, said the worst days for the U.S. territory would be Monday and Tuesday as the plume travels toward the U.S. southeast coast. The main international airport in San Juan was reporting only 5 miles (8 kilometers) of visibility.

The mass of extremely dry and dusty air known as the Saharan Air Layer forms over the Sahara Desert and moves across the North Atlantic every three to five days from late spring to early fall, peaking in late June to mid-August, according to the U.S. National Oceanic and Atmospheric Administration. It can occupy a roughly two-mile thick layer in the atmosphere, the agency said.

Alamo said a small tropical wave headed to the Caribbean was expected to alleviate conditions by Thursday.

Some are concerned about how this will affect those already dealing with respiratory symptoms from COVID-19 and well, that is something we should all take into consideration. This dust concentration is very high and it could really affect people in a lot of ways. This dust as a whole is very dangerous to those with respiratory issues, especially those with asthma.

NY Times reported as follows on this cloud and its movement as well as how it could affect us:

But the dust plume also could have effects on certain health problems.

“This can be an allergen that is uncomfortable with asthma or reactive airways,” Dr. Sandro Galea, dean of the Boston University School of Public Health, said on Monday. He suggested that people monitor the “level of air particles in their area and take precautions in working or being outside as this passes through.”

Dr. Len Horovitz, a pulmonary specialist at Lenox Hill Hospital in New York City, also said on Monday that “particulate matter of this dust cloud contains more silica, and is a hazard to those with underlying lung conditions. But even normal healthy people are subject to irritant effects.”

Satellite images from the past few days show the thick dust as a brown mass moving off the west coast of Africa, crawling across the Atlantic and then drifting over the eastern Caribbean on Sunday. The mass is expected to arrive in the Gulf Coast states, including Texas and Louisiana, on Wednesday and Thursday.

To learn more about this please take a look at the video below. Being aware of things like this can really make a difference. While we do not yet know how this will play out, it could be quite devastating for some. Just because it doesn’t sound like much doesn’t mean it is without issue. Yes, things like this are somewhat common but this cloud is quite enormous in comparison to what we’re used to seeing.