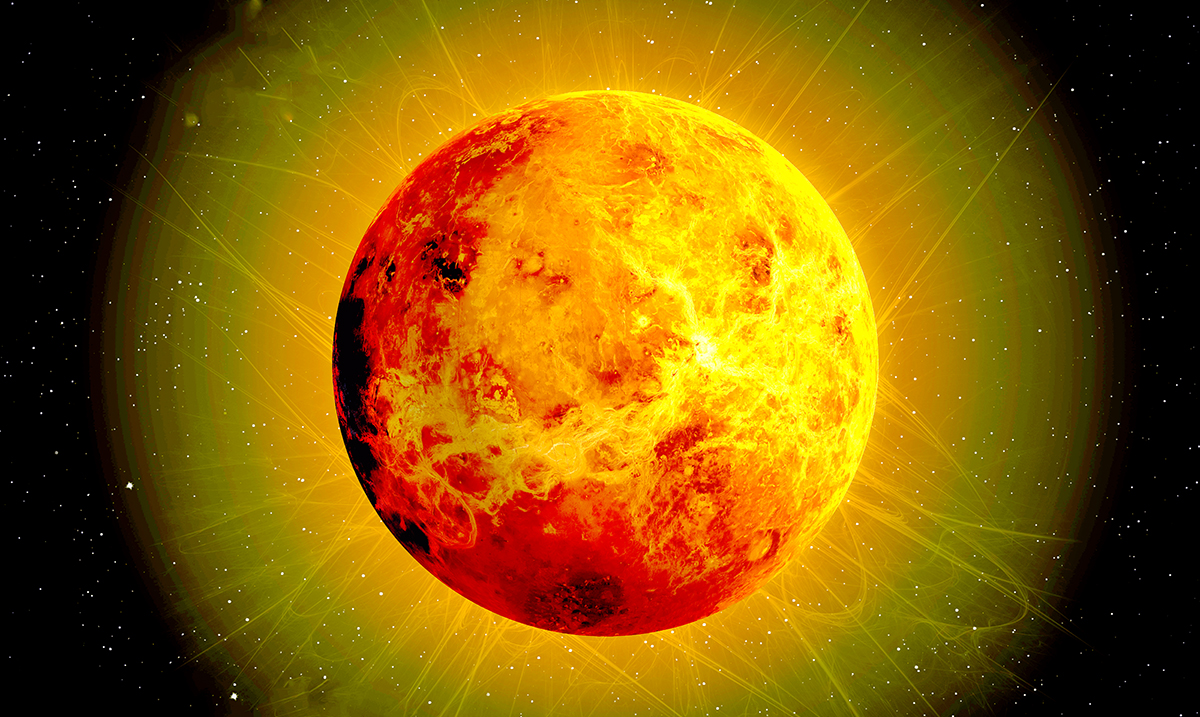 How Venus Died And Why The Earth Is Next

By Gerald SinclairAugust 12, 2019No Comments

Sure, we all know that the planet Earth is able to sustain life as we are all present here thriving on it. That being said, Venus was once quite like our home planet and could have been just as beautiful.

Because Venus is closer to the Sun than planet Earth, it gets a lot more sun than we do. This caused the planets ocean to evaporate and from there, things went south quickly. In ancient times Venus might have been quite an amazing sight. It is currently a ‘hellish’ world at best but if it were a bit further away from the Sun, its present conditions would be something similar to our own.

NASA’s website wrote as follows on the topic of Venus itself:

From space, Venus is bright white because it is covered with clouds that reflect and scatter sunlight. At the surface, the rocks are different shades of grey, like rocks on Earth, but the thick atmosphere filters the sunlight so that everything would look orange if you were standing on Venus.

Venus has mountains, valleys, and tens of thousands of volcanoes. The highest mountain on Venus, Maxwell Montes, is 20,000 feet high (8.8 kilometers), similar to the highest mountain on Earth, Mount Everest. The landscape is dusty, and surface temperatures reach a scalding 880 degrees Fahrenheit (471 degrees Celsius).

Venus is covered in craters, but none are smaller than 0.9 to 1.2 miles (1.5 to 2 kilometers) across. Small meteoroids burn up in the dense atmosphere, so only large meteoroids reach the surface and create impact craters.

Almost all the surface features of Venus are named for noteworthy Earth women — both mythological and real. A volcanic crater is named for Sacajawea, the Native American woman who guided Lewis and Clark’s exploration. A deep canyon is named for Diana, Roman goddess of the hunt.

Venus is a planet that consists mostly of carbon dioxide and even clouds sulfuric acid droplets. Its thick atmosphere traps the Sun’s heat in and leaves temperatures on the surface easily reaching up to eight hundred degrees or more Fahrenheit. Spacecrafts we send there do not last long and it is not likely that anything would be able to survive on the planet itself. While life there might have been possible in the past, it is not possible anymore.

Venus has over time turned into a runaway greenhouse with temperatures growing rapidly and eventually, this too will happen to our planet Earth. You see, as the Sun grows older it grows brighter and more prominent. Venus was as time passed affected more and more based on its location. We are next in line and thus next to receive this fate perhaps in a hundred million years or so technology will have evolved to a point where we can combat things to prevent it but if not, we too will become unable to sustain ourselves.

While this might sound a bit crazy it is very interesting and quite true. To learn more on the topic please feel free to check out the video below. What do you think about all of this?