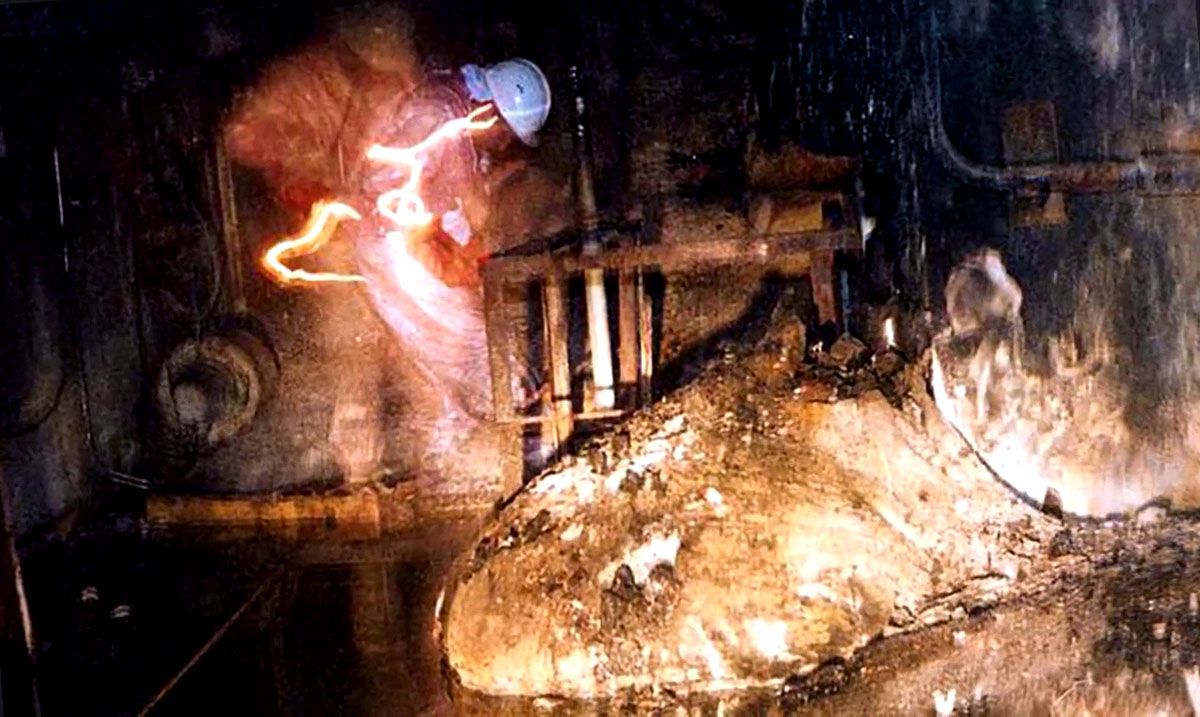 Haunting Image Of The Basement At Chernobyl

The Chernobyl accident/disaster for those who do not know was the result of a flawed design in a nuclear reactor that when partnered with workers who were not trained properly malfunctioned in one of the worst possible ways. This reactor exploded and causes more damage than most people will ever be able to fathom.

The Chernobyl disaster happened in the Ukraine at a nuclear power plant back in the year 1986. It was brought on by a simple mistake made by those operating the plant itself and made clear how unimportant safety was in that time period. This disaster killed about thirty operators and firemen within three months of exposure and some people died almost immediately.

In regards to the events causing this disaster World-Nuclear wrote as follows on their website:

On 25 April, (1986)prior to a routine shutdown, the reactor crew at Chernobyl 4 began preparing for a test to determine how long turbines would spin and supply power to the main circulating pumps following a loss of main electrical power supply. This test had been carried out at Chernobyl the previous year, but the power from the turbine ran down too rapidly, so new voltage regulator designs were to be tested.

A series of operator actions, including the disabling of automatic shutdown mechanisms, preceded the attempted test early on 26 April. By the time that the operator moved to shut down the reactor, the reactor was in an extremely unstable condition. A peculiarity of the design of the control rods caused a dramatic power surge as they were inserted into the reactor (see Chernobyl Accident Appendix 1: Sequence of Events).

The interaction of very hot fuel with the cooling water led to fuel fragmentation along with rapid steam production and an increase in pressure. The design characteristics of the reactor were such that substantial damage to even three or four fuel assemblies would – and did – result in the destruction of the reactor. The overpressure caused the 1000 t cover plate of the reactor to become partially detached, rupturing the fuel channels and jamming all the control rods, which by that time were only halfway down. Intense steam generation then spread throughout the whole core (fed by water dumped into the core due to the rupture of the emergency cooling circuit) causing a steam explosion and releasing fission products to the atmosphere. About two to three seconds later, a second explosion threw out fragments from the fuel channels and hot graphite. There is some dispute among experts about the character of this second explosion, but it is likely to have been caused by the production of hydrogen from zirconium-steam reactions.

Two workers died as a result of these explosions. The graphite (about a quarter of the 1200 tonnes of it was estimated to have been ejected) and fuel became incandescent and started a number of fires, causing the main release of radioactivity into the environment. A total of about 14 EBq (14 x 1018 Bq) of radioactivity was released, over half of it being from biologically-inert noble gases.*

About 200-300 tonnes of water per hour was injected into the intact half of the reactor using the auxiliary feedwater pumps but this was stopped after half a day owing to the danger of it flowing into and flooding units 1 and 2. From the second to tenth day after the accident, some 5000 tonnes of boron, dolomite, sand, clay, and lead were dropped on to the burning core by helicopter in an effort to extinguish the blaze and limit the release of radioactive particles.

It is important to understand what the disaster was in general before moving forward in this article. Now, the cooling molten mess of radioactive material that has now been left behind from all of the things noted above is called the ‘elephant’s foot’. This interesting little spot is the center of it all, it shoots out radiation now and always has since this occurrence.

One of the most well-known images of this location happens to be a photo of the reactor itself as it sits. This photo belongs to Artur Kporneyev and as you can see it is somewhat warped from the radioactivity within that area on its own. This photo was taken in 1996 and was at least ten years after the disaster had occurred. 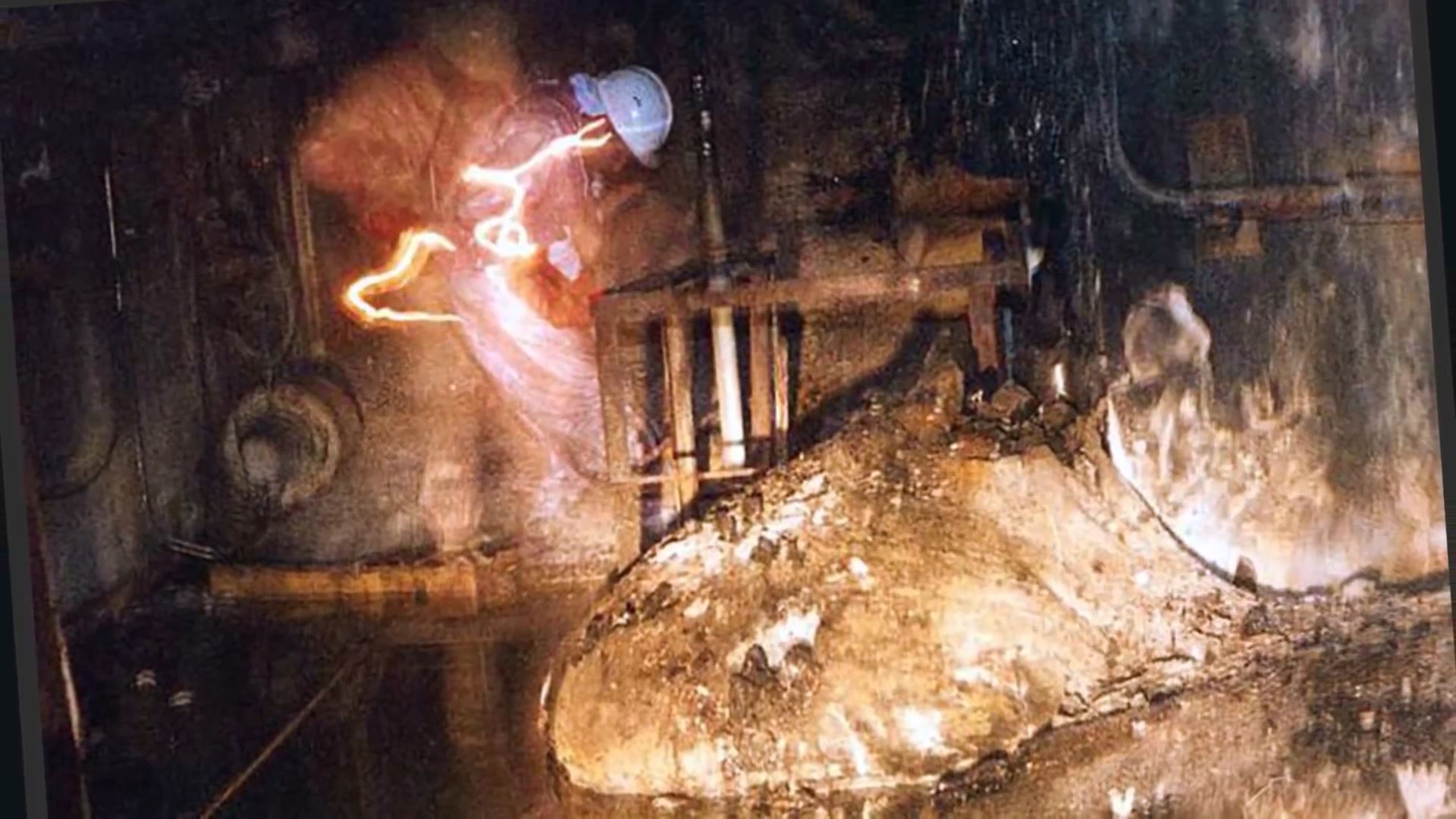 Image Credit: Artur Korneyev/ US Food and Department of Energy.

Images like this one serve as a serious reminded how dangerous this kind of thing can be. These nuclear reactors are no joke. Having to deal with events like this one and those that occur at Fukushima in the future would be devastating to not just human life but life, in general, depending on where things take place.

As you will notice in the image above, the photo seems distorted and strangely marked but that I can assure you is not because of the quality of the film itself but because of the radioactivity in the area when it was taken. If radiation is able to affect even the ways a film develops could you imagine what it does to our bodies? To learn more about Chernobyl’s disaster please feel free to check out the videos below.