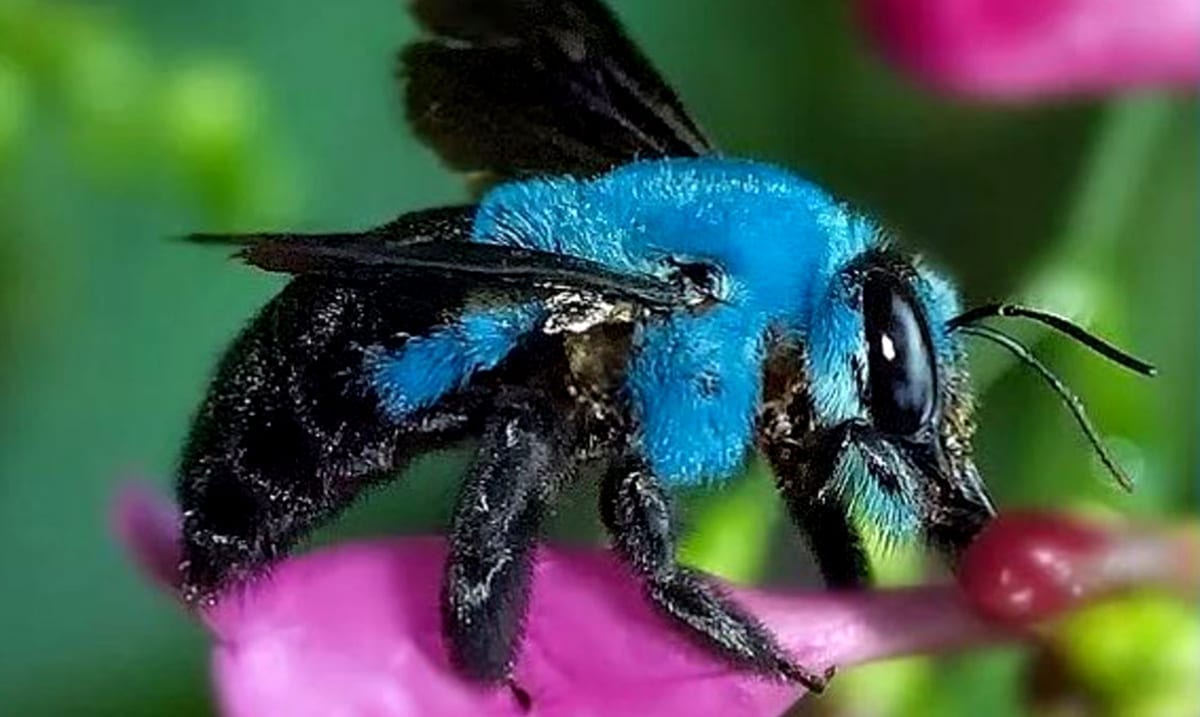 For those who may not be aware, there is a species of bee known as the Osmia calaminthae. This bee is as you’d expect a bit blue in color unlike your average bee and for a while now has been seemingly gone from anyone’s view.

This kind of bee is so rare to spot that many in the scientific world thought it was gone for good, however, in recent times they’ve popped back up. After being so unsure for a long period about whether or not these interesting little creatures still existed, spotting one is a serious feat. According to Weather.com the plant this kind of bee needs to survive is very rare in Florida as well which means it’s hard for this kind of bee to get by.

This species had for the longest only been recorded in four locations of about a 16 square mile area in Wales Ridge and it seems since Spring a Florida Museum of Natural History has gotten lucky in ‘rediscovering’ these little guys. While it might not sound like much to the average person, this find is remarkable. These been were thought to be gone for good and to begin with we did not know much about them. Now that we know they are still out there we have so much to learn.

Chase Kimmel a postdoctoral researcher told Florida Museum as follows about this find:

“I was open to the possibility that we may not find the bee at all so that first moment when we spotted it in the field was really exciting,”

“We’re trying to fill in a lot of gaps that were not previously known,”

“It shows how little we know about the insect community and how there’s a lot of neat discoveries that can still occur.”

These researchers hope to study this specific kind of bee and get a better understanding of how it interacts with other insects, forages, and things of that nature. Lots of questions are being brought forth and perhaps in time, we will have our answers.

Weather.com wrote as follows about this marvelous find:

On March 9, Kimmel and a volunteer went to put out traps to see if they could find the bees. That’s when “we saw a blue bee bopping its head,” Kimmel said. They caught it and examined it and saw that it met all the qualifications for the ultra-rare blue calamintha bee.

Currently the bee does not have any protection status. It is considered a “species of greatest conservation need,” but has neither state nor federal protection. The main host plant that the bee utilizes, Calamintha ashei, is a state threatened species. In 2015, there was a petition to have the bee included, but it still lacks the status as there is not enough known about it for it to qualify for the endangered species list.

According to Kimmel, it is too early to know if the bee will be registered on the endangered species list, because more research needs to be done. There’s still much to learn about the blue calamintha bee. Not much is known about the bee’s biology. Does it prefer sun or shade? Such information is what Kimmel’s team will be looking into.

Kimmel added that “in an ideal world, it would be great to look at how management choices impact the plant and the population of this bee.” For example, the Florida Scrub Jays are an endangered species, and as such, conservationists and governments have tried to protect them, which includes managing wildlife to enable them to flourish. However, these management methods, which includes burning vegetation including the flowers that support the blue calamintha bees, could be damaging to the bee population, Kimmel explained. “Is the management for that bird the same as the management for this bee?” he poses. Other questions include how quickly does a bee return to an area that’s been burned, and how quickly does a plant regenerate to have the blossoms to support that bee.

The ongoing research is funded by a Florida Fish & Wildlife Conservation Commission grant through the U.S. Fish and Wildlife Service. This research falls under the grant’s qualifications to conserve important wildlife habitat and/or preventing species extinctions. “There was a lack of scientific information regarding the occurrence and life history of the bee[, and more] information was needed to make an informed determination regarding the classification status for this species under the Endangered Species Act,” according to a spokesperson at the U.S. Fish and Wildlife Service.

What do you think about this find? I for one think it is monumental for a number of reasons. It’s always a huge feat when we find something that was previously thought to be gone forever.