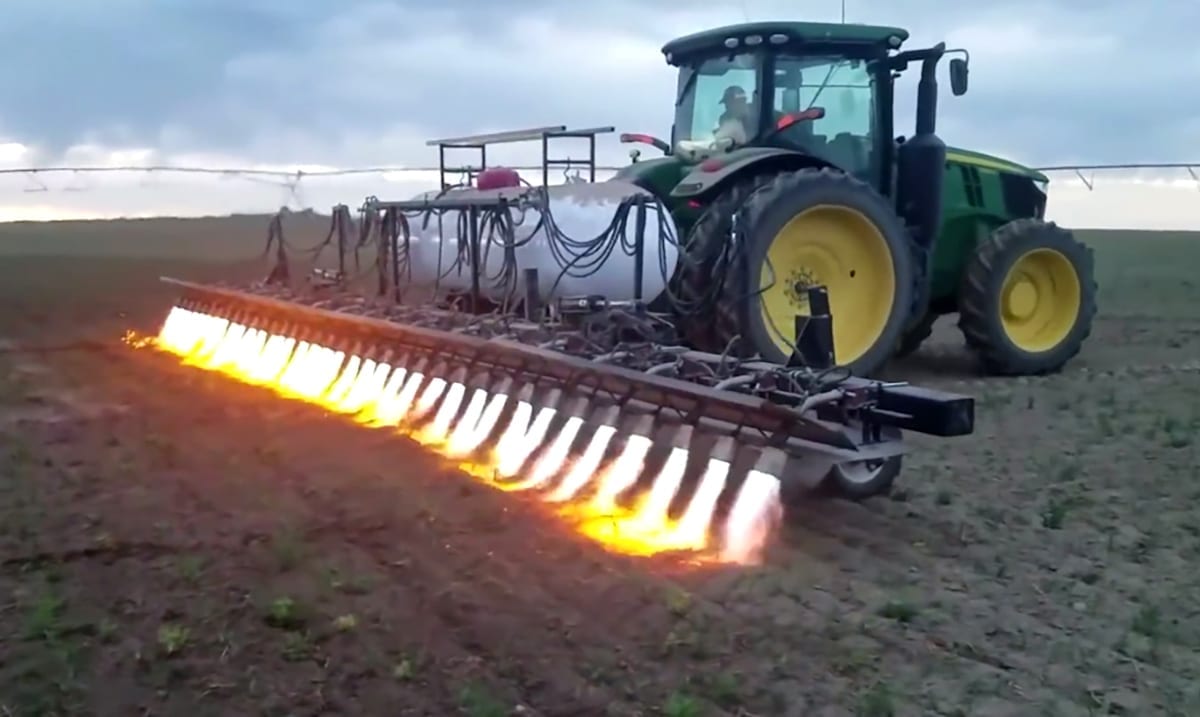 Flamethrowing Tractors – Get Rid Of Weeds Without Using Chemicals

While the concept of flame weeding might sound insane, it could replace chemical use in big ways. Now, for those who do not know flame weeding is a process through which weeds are killed with intense heat.

Flame weeding can be done with a single flame or even on a huge tractor that does it on a wide scale, how you get things done in this sense is up to you and depends on what you’re doing. It does seem many farmers are turning to this kind of thing to get rid of weeds but that doesn’t make it look any less horrifying, at least when it comes to the ‘flamethrowing tractor.’ I recently came across a video by Tech Insider that showcased these tractors, and they are truly something else.

You see, these tractors are equipped with torches and propane tanks that allow them to basically shoot flames out where sprayers would otherwise be present. The video I watched was made in collaboration with BigYield.us who use this process and these flame weeders on their own fields as a whole. While it might look like they’re just setting the whole field on fire, that’s nowhere near what they’re doing.

Now, in regard to what flame weeding is overall and better explain things Flame Engineering wrote as follows on their website:

Flame weeding is what we like to call a “slow kill”. Essentially, you are destroying cell structure in the plant leaf. The weed will no longer put energy toward growth (photosynthesis) taking the kill through the root system. YES, flame weeding will kill the roots too! Even on big weeds (over 6″), you will see a stunting effect and even a kill within a few days, depending on how established the root system is and how long the plant was exposed to heat. Again, multiple applications may be necessary for well-established pants. When you see green – flame!

It is important to remember when flaming in and around desirable plants that heating those leaves can cause damage as well. Flame is not like a broadleaf herbicide in that it will only fill the weeds. Fire does not know the difference between desirable flowers and undesirable weeds. Thus, be careful around flowers and shrubs – particularly evergreens. Conifers are very flammable and should be avoided at all costs! Poison ivy, oak or any poisonous plant should be avoided also- the vapor/smoke from flamed leaves will cause a rash to your skin, eyes, and lungs! Yuck!

Sure, this means in itself might take some getting used to but if it cuts back on chemical use and makes it easier for farmers to do what needs to be done in order to grow their crops could it be a bad idea? To see this kind of thing at work yourself check out the video below which was mentioned earlier, it truly will blow you away.