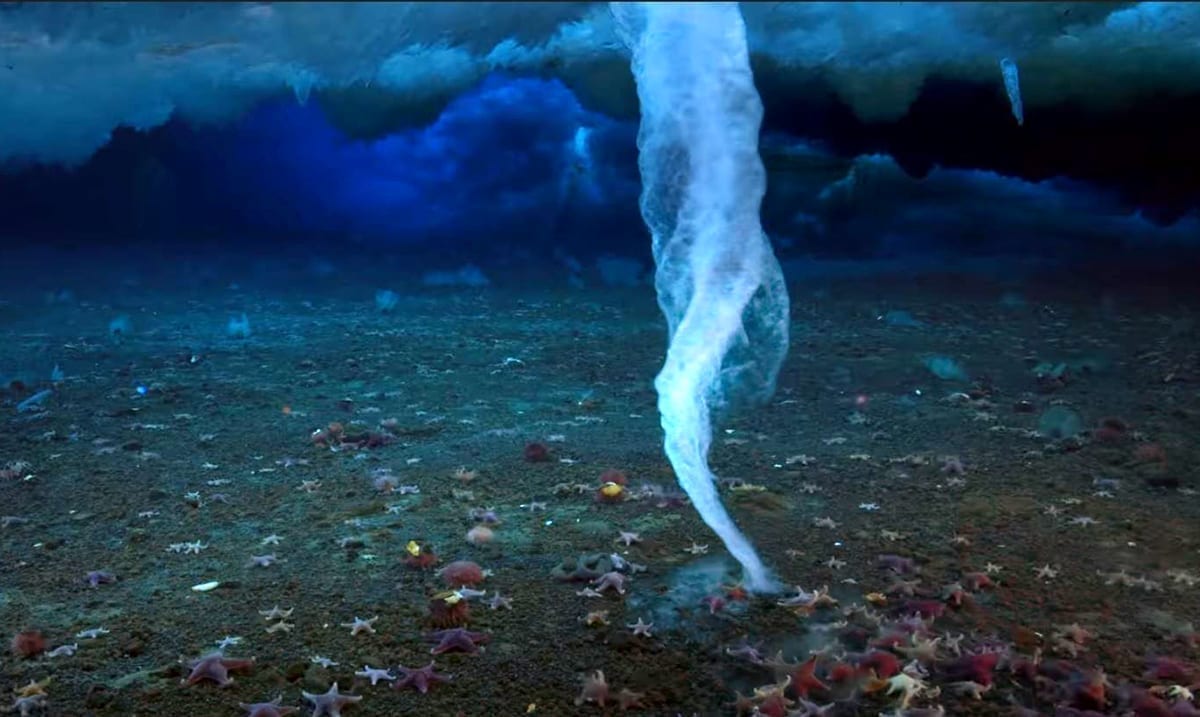 While not everyone knows this you can sometimes find ‘icicles’ underwater. Sure, they’re a bit different than you’d expect, but they’re also quite mind-blowing for a number of reasons.

These sea icicles or fingers of death, whatever you want to call them are not something we see often and are quite eerie in a lot of ways. They are technically called brinicles and their forming process is quite interesting. While you might assume they’re just frozen bits that fell into the water or something of the sort, they’re not.

Live Science wrote as follows explaining the formation of brinicles:

The brinicle-forming process goes like this: When sea ice freezes in the Arctic and Antarctic, the salt and other ions in the water is excluded from the water crystals, said study author Bruno Escribano, a researcher at the Basque Center for Applied Mathematics in the Basque Country in northern Spain. This salt-heavy brine accumulates in fractures and compartments within the sea ice.

Inevitably, however, sea ice cracks and the brine leaks out. The brine itself is colder than the freezing point of seawater, since salt-rich water freezes at lower temperatures (hence the reason people put salt on icy sidewalks in the winter, enabling the ice to remain a liquid when it’s below freezing), Escribano told OurAmazingPlanet.

Since the concentration of water in the brine is lower than that in the ocean — and water moves from high to low concentrations, via osmosis — water is attracted to the brine. But the brine is so cold that the water freezes, forming a descending tube of ice, Escribano said.

We do not often get to observe these interesting things in ‘real-time’ because of how rare they are and the conditions they are brought forth in. While these formations don’t always reach the ocean floor, when they do they also freeze the lives they touch as well. When this happens they freeze starfish and whatever else crosses their path in that sense which is quite heartbreaking but also still somehow mesmerizing to see which you can watch in the video below.

All of this having been said we should note that brinicles are not dangerous to us as humans. This is because we wouldn’t ever be caught where they form and because we would be much quicker than the sea urchins and things of the sort that get caught in their paths. That being said, I doubt it would be fun to somehow end up touched by this kind of thing.

Phenomena.org wrote as follows on whether or not Brinicles are a threat to us as humans:

Brinicles are not dangerous to humans, as man seldom travels beneath the ice sheets where they form. Divers who study brinicles take precautions to avoid hypothermia or other cold-water injuries.

However, slow-moving, bottom-dwelling creatures such as starfish and sea urchins are unable to move quickly enough to escape the flow of brine. They may become encased in ice, completely frozen by the brine. That is how brinicles earned the title “icicles of death.” Pools of super-cold brine may also form and remain beneath the site of brinicle formation. These so-called “black pools of death” can also be deadly to small sea creatures that wander through them.

#Beautiful and #deadly. “Unlike #icicles, which are formed by water dripping and freezing in colder air, #brinicles form because of the peculiarities of super cold #ocean #water. In the arctic, the air can be -4° F, while the water is comparatively warmer at 29° F. In these conditions, #seaice forms with channels through which highly salty water flows downward toward the bottom. The very cold, very salty water freezes the warmer, less salty water slowly creating a giant tube through which the freezing water flows.” #discoverychannel#frozenplanet

See, they’re not likely going to be causing too much of a stir, but they are quite mind-blowing to see. Nature in many ways is truly fascinating and things like this only prove that further. Brinicles might not be the coolest thing underwater, but they sure are pretty neat.