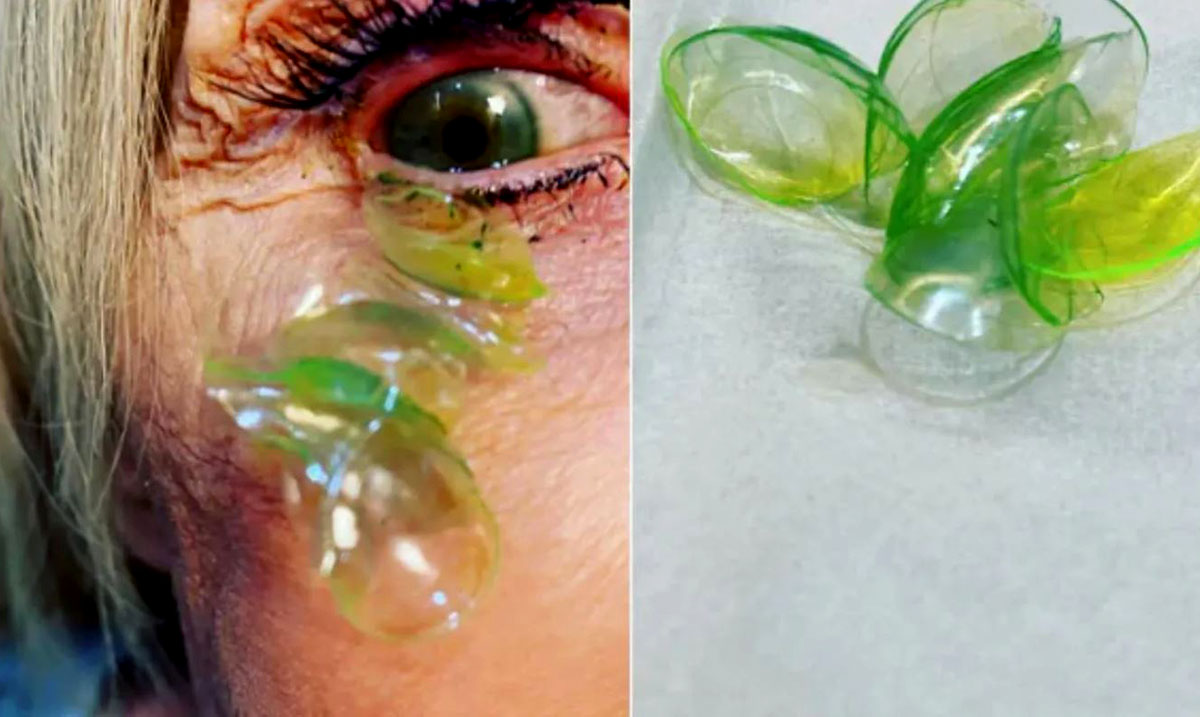 Dr. Katerina Kurteeva is an optometrist who recently encountered a patient who came in reporting that her vision was blurry and that she was experiencing pain. While typically patients are asked to come in once a year (especially seniors), the woman had not been in two years.

The woman was around her mid-70s and she liked to wear contact lenses. Upon visiting Dr. Kurteeva, and reporting her symptoms, Kurteeva began to investigate. “My mind jumped to the possibilities of what it could be: a piece of broken contact lens, a scratch on the cornea, an infection, an eyelash, or debris from makeup. I’d only know for sure once I did the examination.”

As she began her investigation, she used an anesthetic and yellow dye, which helps her to identify scratches and foreign bodies. At first glance, she saw nothing on the cornea and continued to pry. She manually separated the upper and lower lids, to see if anything had gotten into the upper or lower fornix, or corners of the eye.

However, she didn’t see much of anything, aside from some mucous, which is a sign of irritation. “I was puzzled,” she says. She continued to investigate and pulled out an eyelid epculum to keep her eyelids apart. She then asked the patient to look up and down, and then she saw it.

“I could see the edges of a couple of contacts stuck to each other. Pulling them out, I felt like I could still see more and asked my assistant to get my phone to record the removal. ”

She asked the patient once more to look down, and noticed a dark-purple blob of contact lenses that were stuck in her eye. “It almost looked like a second pupil. I gently started using a Q-tip to peel the lenses apart one by one, like you would deal a deck of cards. They were coming out in a chain, drooping down her lid. There were a lot of contact lenses — I thought this could be my Guinness Book of World Record moment.”

The woman immediately felt better, but couldn’t believe what was going on, either. Once the blob was removed, she found a few more in her eye corners, flushed the patient’s eyes and removed some mucous. As she laid out the contacts and counted, she found that there were 23!

Shortly after the visit, she posted the video to help educate others on the importance of ensuring they have removed their contacts each day. While this woman was extraordinarily lucky, others may not be so lucky. She could have lost her vision, scratched her cornea, or worse.

“Although I can’t be certain of how she managed to forget to remove all those lenses, it could because she had been wearing contact lenses for 30 years. When a person wears contact lenses over a long period of time, it can cause desensitization of the corneal nerve endings. She wouldn’t have felt something like 23 contact lenses as sharply. It also could have been her age. Older people’s eyelid fornix, the least sensitive space, is much deeper, and the contact lenses just sat there for a while, not bothering her. ”