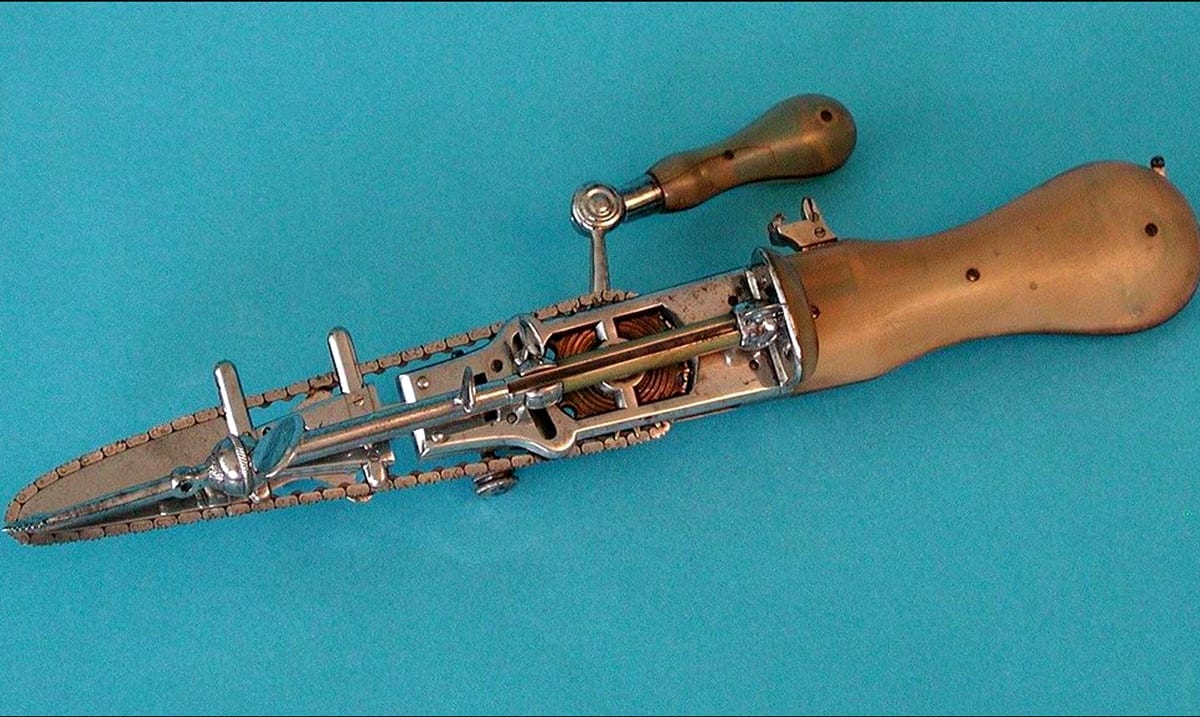 Chainsaws Were Actually Invented To Help With Childbirth

When you think of the word ‘chainsaw’ chances are you think of the ‘Texas Chainsaw Massacre’ or even just cutting down trees and things of that sort, right? Well, what if I told you when they were first invented, chainsaws were used during childbirth?

As hard to believe as it is, one of the most interesting things about chainsaws are their origins.  They were invented, at least on a small scale to help during child delivery. The prototype of the chainsaws we see today was created in the late 18th century by two Scottish doctors.

As follows has been written on the first ‘chainsaw’:

The prototype of the chain saw familiar today in the timber industry was pioneered in the late 18th Century by two Scottish doctors, John Aitken and James Jeffray, for symphysiotomy and excision of diseased bone respectively. The chain hand saw, a fine serrated link chain which cut on the concave side, was invented around 1783-1785. It was illustrated in Aitken’s Principles of Midwifery or Puerperal Medicine (1785) and used by him in his dissecting room. Jeffray claimed to have conceived the idea of the chain saw independently about that time but it was 1790 before he was able to have it produced. In 1806, Jeffray published Cases of the Excision of Carious Joints by H. Park and P. F. Moreau with Observations by James Jeffray M.D. In this communication, he translated Moreau’s paper of 1803. Park and Moreau described successful excision of diseased joints, particularly the knee and elbow. Jeffray explained that the chain saw would allow a smaller wound and protect the adjacent neurovascular bundle. While a heroic concept, symphysiotomy had too many complications for most obstetricians but Jeffray’s ideas became accepted, especially after the development of anesthetics. Mechanized versions of the chain saw were developed but in the later 19th Century, it was superseded in surgery by the Gigli twisted wire saw. For much of the 19th Century, however, the chain saw was a useful surgical instrument. 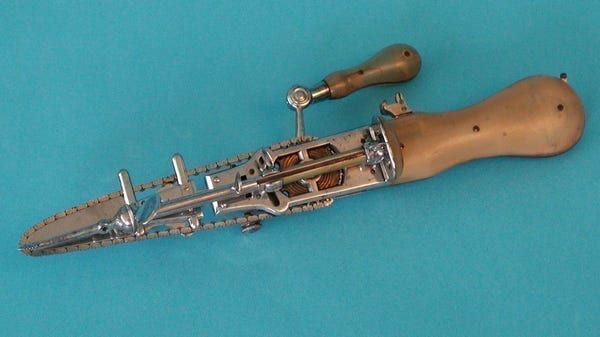 The procedure these small chainsaws carried out was quite scary and while likely important back then is not really something we do anymore because the medical world has advanced so much. You see these chainsaws were used during symphysiotomy to cut through the cartilage of the pubic symphysis. This widens the pelvis and allows the baby to have more room to come out. While in modern times we would just have a cesarean.

That being said, according to The Guardian this barbaric operation was carried out on an estimated 1,500 women in Ireland between the 1940s and 1980s even though the rest of the world seemed to stop using it after the mid 20th century. Those specific Irish women also note that they did not give consent for this procedure either and has left them with lots of long term health issues. You can read more on that by clicking here.

Recovering from a broken pelvis takes a lot longer than a mere c-section and once this procedure use died out someone in San Francisco realized the tools themselves would be beneficial in cutting down giant redwood trees according to All That’s Interesting. From there, things moved quickly and inventors and logging people from all over worked to make their own versions of the chainsaw which has shaped what we now have in modern times. Now, the only time you’ll see chainsaws being used on humans is in horror films.