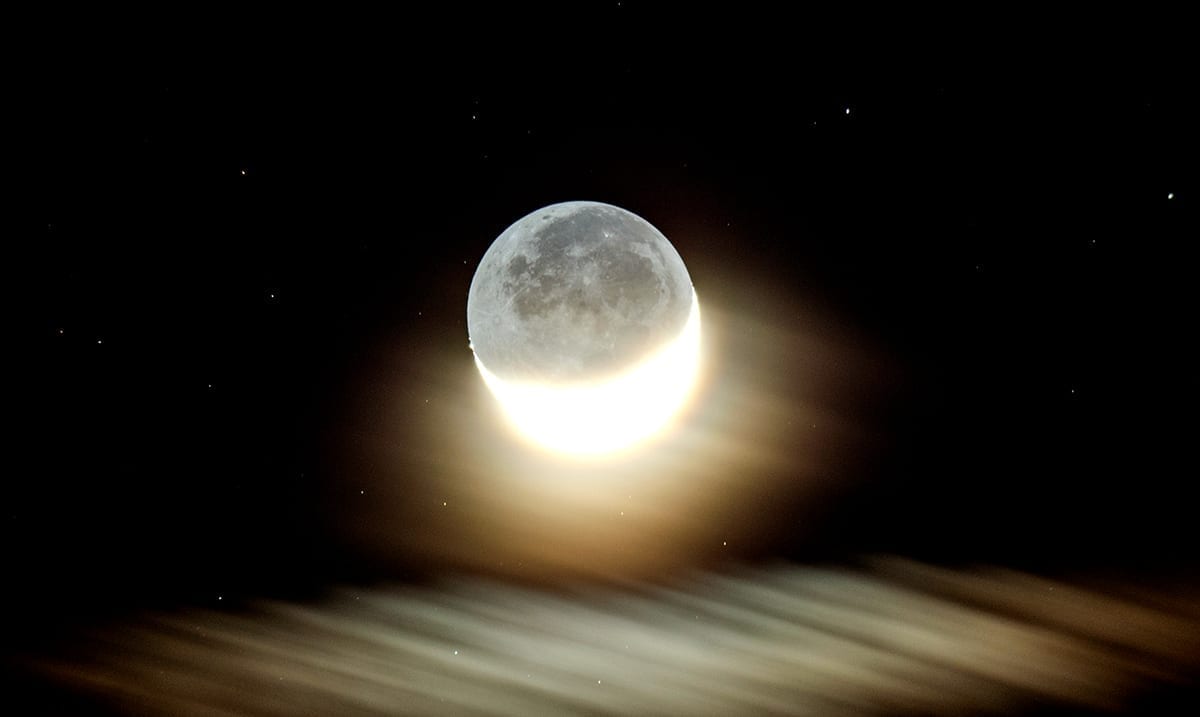 As we near the end of April, we are in for quite the treat. Tonight (April 26th) we will all be able to see something called ‘Earthshine’ or ‘planetshine.’

According to Time and Date’s website, Earthshine is a dull glow that lights up the unlit part of the Moon itself. This sometimes happens because the light from the Sun reflects off of the surface of our home planet and then back onto the Moon. This meaning we get a pretty almost crescent glow at the bottom of the Moon.

Chances are you saw something like this last night or possibly the night before but tonight is going to be likely your last chance to see it this month if you’ve not yet taken a gander. While it might not sound like much, it is quite the sight and well worth looking at. I always try to catch this kind of thing shortly after a New Moon, which happens to be when it may tend to happen.

Time and Date wrote as follows about this phenomenon:

Earthshine occurs when sunlight reflects off the Earth’s surface and illuminates the unlit portion of the Moon’s surface.

Since the light that generates earthshine is reflected twice – once off the Earth’s surface and then off the Moon’s surface, this light is much dimmer than the lit portion of the Moon.

This phenomenon is called planetshine when it occurs on other planets’ moons.

Earthshine’s brightness is also affected by the Moon’s albedo. Albedo is a measurement of how much sunlight a celestial object can reflect. It is measured on a scale, which ranges from 0 to 1. An object that has albedo of 0 does not reflect sunlight and is perfectly dark. A celestial object with an albedo of 1 reflects all of the Sun’s rays that reach it.

The Moon has an average albedo of 0.12, while the Earth’s average albedo is 0.3. This means that the Moon reflects about 12% of the sunlight that reaches it. The Earth on the other hand, reflects about 30% of all the sunlight that hit its surface. Because of this, the Earth, when seen from the Moon would look about 100 times brighter than a full Moon that is seen from the Earth.

According to NASA April, May, and June are the best months to see this kind of thing and during this lockdown, it might be one of the few things we can look forward to. With everyone stuck at home, you’d be surprised how many people are become true stargazers. As you can see in the images below, this kind of thing is quite beautiful and if you’ve ever seen Earthshine before, you know how mesmerizing it truly is.

Tonight Venus will also be present in the night sky though depending on where you are you may not be able to see it well. For more information on this interesting celestial event check out the video below. Things like this don’t just happen all the time but when they do happen, we all seem quite blow away by them. Sure, the moon is usually quite beautiful but tonight it may truly be something that takes your breath away.