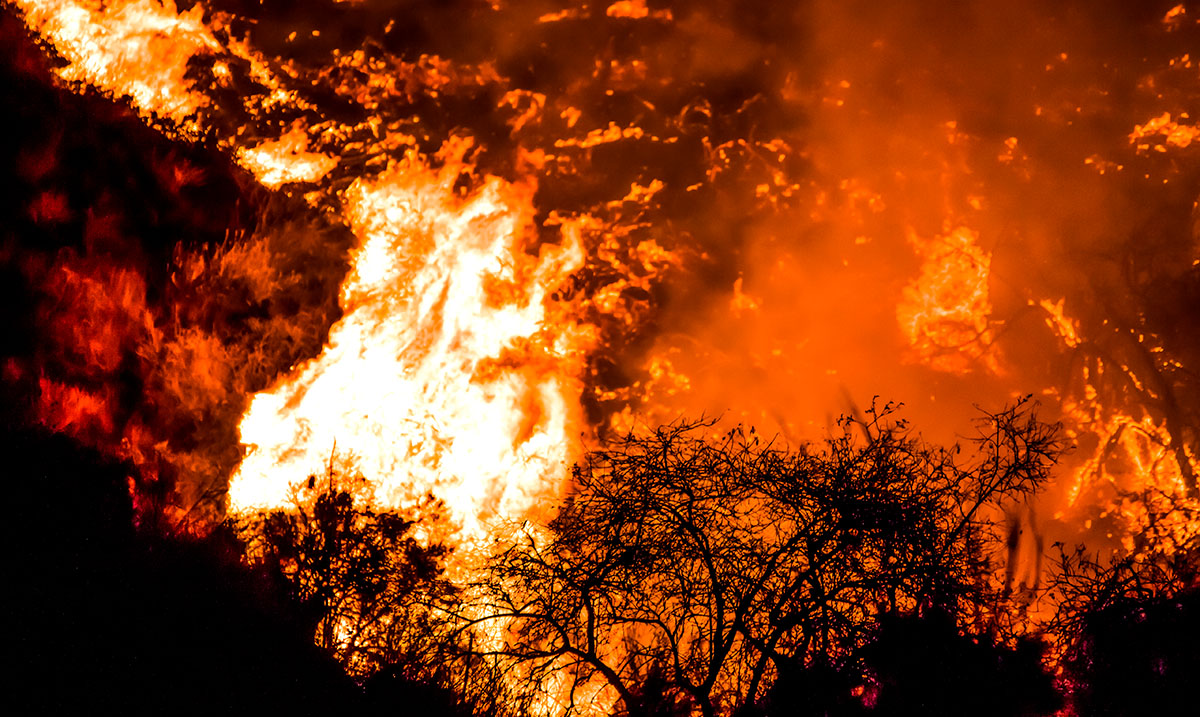 By Gerald Sinclair November 2, 2019 No Comments

There are red flag warnings in effect across California right now as wildfires continue to burn and a hurricane is approaching, things could not look worse. These dry temperatures might be great to some but the damage that can be done as a result is quite mind-blowing.

For those who do not know a red flag warning is basically a warning sent out that makes the public aware that warm temperatures, low humidity, and strong winds are working together to create much more fire risk than usual. While California is no stranger to wildfires with some burning currently the winds of this hurricane could leave serious devastation once all is said and done. While some of this has died down, not everyone is in the clear.

Winds from Santa Ana have been wreaking havoc for days now and twirling flames upward causing damage across Southern California what seems like all week. With winds beginning to die down as noted above, the lack of moisture in the air and current situations overall still call for an extreme red flag warning. Just because it’s a little chilly outside doesn’t mean that these fires are suddenly gone.

In regards to the current red flag warnings still in effect, NBCLosAngeles reported as follows:

The three main elements of red flag weather are warm temperatures, very low humidity, and stronger winds. Temperatures were in the 40s and 50s in parts of Southern California early Saturday. Expect winds of 10-20 miles per hour with isolated gusts to 35 mph.

The humidity level will be down to between 2 and 8 percent, a major reason why there’s a red flag warning for mountain areas in Los Angeles County and the Santa Clarita area until 6 p.m. Although wind speeds have decreased, gusty northeast winds will combine with low humidity to create a hazardous situation in those areas, especially on hillsides covered with vegetation that dried out during the dry summer months.

“The fuel is bone dry, so we have low fuel moisture content and low relative humidity, so you can easily have a topography and fuel-driven fire,” said Chief Sam Digiovanna, of the Verdugo Fire Academy. “Make sure you stay on guard. We’re still on red flag fire alert.”

Firefighters are increasing containment lines around several fires that broke out during a week of low humidity and relentless winds. The Maria Fire in Ventura County had burned more than 9,000 acres. Containment was at 20 percent.

Elsewhere, firefighters are in mop-up mode, watching for flare-ups and hot spots.

The dry conditions are expected to continue through the weekend. Gusty offshore winds will last through Saturday with peak gusts up to 35 mph in the valley and interior mountains of LA and Ventura counties.

According to USA Today, as of last night (November 1st around 3 am), these hurricane winds fanned at least 10 different wildfires across the state and put a lot of work in place for those fighting against them. Over 106 thousand people were without power and it seems still currently are. While these planned power outages were expected to limit fire risks we do not know if they have made significant differences.

USA Today reported as follows on the topic of shutting power off during this kind of situation:

Michael Young, who leads the management of wildfire models in North America for the global firm Risk Management Solutions, said he sympathizes with the difficult choices utility companies are facing and the reality that in some ways they’re damned if they do and damned if they don’t.

Young cited research that showed 84% of wildfires are caused by human activity. It’s not clear what percentage of that figure can be attributed to energy-company equipment, but data provided by Cal Fire shows fires started by power lines spiked from a five-year average of 296 to 408 in 2017, the highest increase in any category of fire causes.

“We do know vegetation hitting power lines and causing breaks does cause sparks,’’ Young said. “And if you can’t fix all the lines and protect them all from high winds, then you have to do something like shutting the power out, right? Do I think it’s the right long-term strategy? Obviously not. You’ve got to get those power lines buried. You have to eliminate that risk.’’

Industry analysts say the risk has increased because of the combination of climate change – higher temperatures and lower humidity – with more houses being built in fire-prone areas and a since-discarded forest-management approach that did not allow for natural burns to clear away underbrush.

For more information on what is going on in California right now please feel free to check out the video below. We can only hope those who are present in the affected areas will be safe and that those out working against these fires are able to do so properly and without losing their lives. Please keep the whole state in your thoughts.