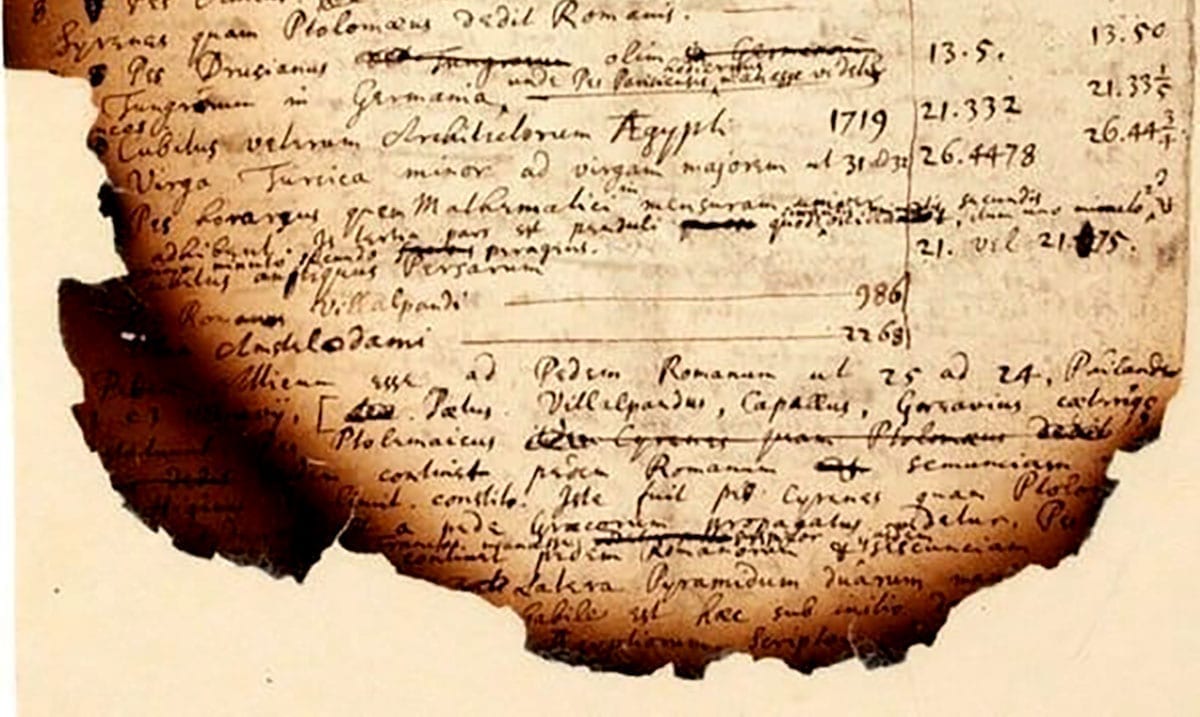 By Gerald Sinclair December 8, 2020 No Comments

While we know that people of the past dove into a lot of different things, their research on some levels has been lost throughout the years. That being said, the work of Sir Isaac Newton even now is becoming more and more apparent in the world as we know it.

Some recently brought to light’ burnt notes from Newton himself have revealed that Newton was diving deeply into the Pyramids for some reason. He actually seems to have been far more enamored by the occult than most would have expected, to be completely honest. According to The Express Newton’s surviving notes only consist of around 10 million words and while most of them are mathematical and quite brilliant, some of them take us to a place we might not have expected. He was fascinated with the biblical apocalypse.

The Express noted some of these texts were on auction and one of them happens to be the ‘scorched remnants’ of paper going over his obscure occult theories. This revealing his thoughts about the Great Pyramid itself. For those who might not be aware Newton believed it was designed using something called a royal cubit. Through the royal cubit, Newton really dove into the concept of ‘refining his own theories on gravitation.’ 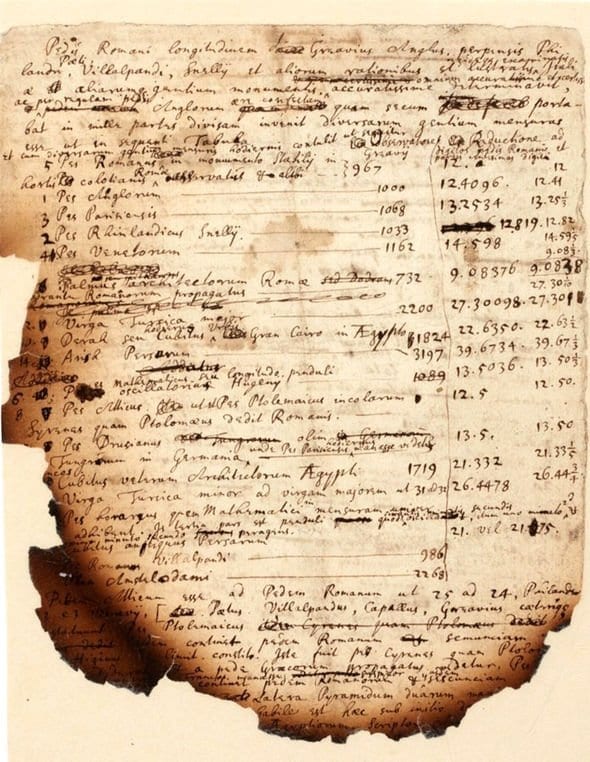 The description for these notes on the auction site goes as follows and break things down a bit:

(i) [recto] Notes on dimensions of the Great Pyramid, beginning (“Arabica Ipse Greavius…”), making use of J. Greaves, Pyramidographia, calculating the royal cubit (“Cubiti Regii”) as one-hundredth of the width of the pyramid, and showing that the dimensions of entrances, tunnels and chambers were all planned in royal cubits, 38 lines, Latin, with extensive revisions and corrections; [verso] note on Greaves’s calculation of the Roman foot and a comparative list of ancient and modern measures, also drawn from Greaves’s work, including the Parisian foot, Rhineland foot, Venetian foot, Attic foot, Egyptian (royal) cubit and measures used in Rome, Turkey, Persia, and elsewhere, 38 lines, Latin, with corrections and revisions; single leaf, 192 x 155mm

(ii) [recto] Notes on the royal cubit and other ancient units of measurement, followed by calculations on the dimensions of the Great Pyramid, its proportions and ratios, and further notes on the stepped shape of the pyramid’s exterior (“…[th]ey diminish neither in the breadth of all alike. But tis proportional to the height of each so that a right line from top to bottom will touch the outward angle of each…”) and dimensions of chambers and galleries, 34 lines, English and Latin, with, written from the bottom, notes on ancient measures, including the ancient Olympic stade (stadium), the Attic and Roman foot (“…Rom. foot to Attic foot as 25 to 24 Philander in l[iber] 3 c 3…”), the Hebrew (Sacred) cubit, and the relative antiquity of ancient measures deriving from Hercules and Moses, 16 lines, Latin and English; [verso] address panel (“For Mr Isaacke Newton | a Fellow at Trinity | Colledg | at Cambridg”), and mathematical calculations, and with remains of red wax seals; single leaf, 238 x 190mm

(iii) [recto] Notes on the dimensions in cubits of the interior galleries and chambers of the Great Pyramid, with notes on the Egyptian (royal) cubit and other measures drawn from Herodotus and other sources, 38 lines, one correction, in English, Latin, Greek, and Hebrew; [verso] reading notes on the analogy of Biblical prophecies, especially those of Daniel and John (“…wisedome to contrive prophesies so that one should be a key to another [… if] any prophesies be relative then surely Daniel & John to each other, […] resemble one another so much & if they be relative in any thing then […] in their main joynts…”), with additional advice on rhetorical method (“…Soft words & hard argument soonest overcome an adversary & offend no sort of f[riend] Exasperating words usually beget that like […] never do good to a mans cause or credit…”), 16 lines, in English, with notes on different ancient measures and citing various sources written down the side, 32 lines, Latin and Greek; single leaf, 190 x 155mm

It is quite interesting to learn that someone like Newton was diving into such topics but really does show that there is more to a human than you would expect. While these pages are burned on some levels, they bring a lot to the table and are pieces of history. The bid for them right now is enormous in my opinion and will only grow higher and higher.

To learn more about this take a look at the video below. What do you think about his notes? I for one think it’s quite fascinating that someone of his stature would have been diving into such topics.