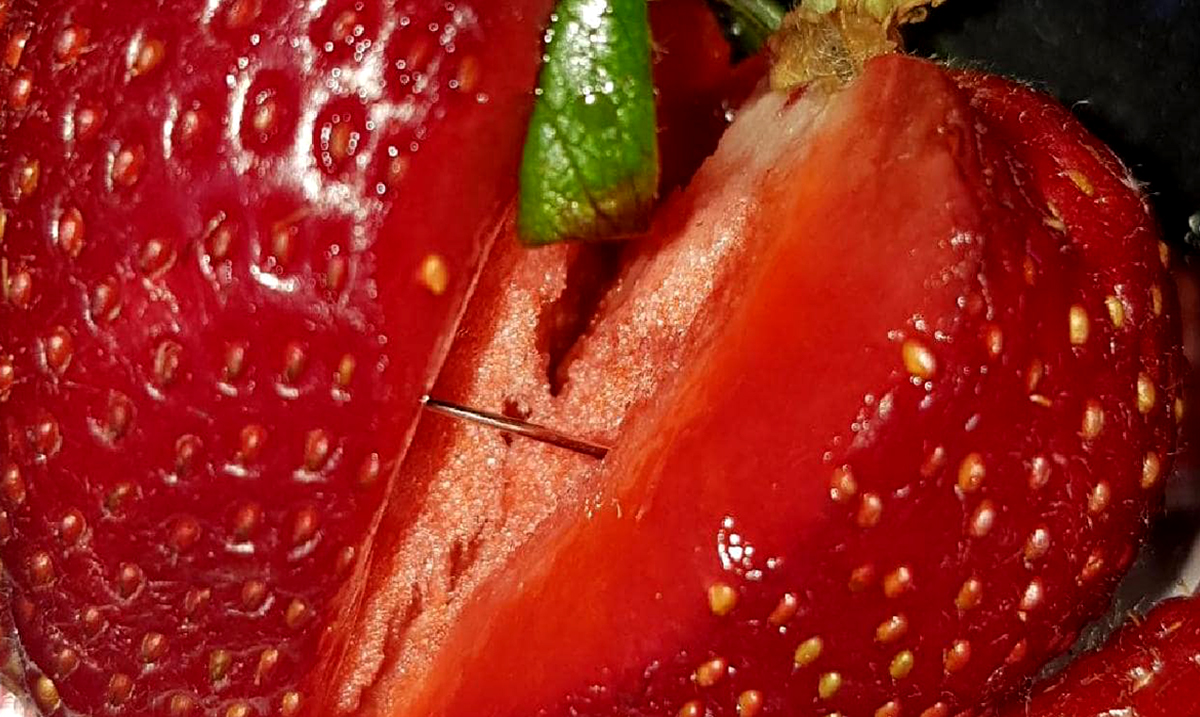 By Gerald Sinclair September 28, 2018 No Comments

All throughout September reports have been flooding in of people in Australia finding needles inside of strawberries. I know this might sound insane, but it is actually happening.

This issue was thought to just be isolated to Australia, but it seems to have spread to New Zealand and Singapore. Over 100 reports have been made and it is thought that the compromised strawberries found in Singapore came from Perth (Australia). Because of this Singapore’s largest supermarket chain has stopped importing strawberries from Australia completely.

These small sharp metal objects have also been found in things like mangoes, bananas, apples, and so forth. This outbreak has caused Australia to enforce stricter laws in regards raising the maximum prison sentence to 15 years for those who are contaminating food in this manner. Before eating any fruit locals are cutting them up into tiny pieces to be sure they are danger-free. There is also a reward for anyone who has information about the things that are happening.

The New Paper reported as follows in regards to these incidents:

Another supermarket chain in Singapore, Sheng Siong, has requested that its suppliers use metal detectors to check each punnet of strawberries.

Meanwhile, the Agri-Food and Veterinary Authority (AVA) said it is in contact with the Australian authorities on the issue and is monitoring the situation.

Its spokesman said yesterday: “The Australian authorities have implemented interim export control measures. Since Sept 19, exporters have been required to provide assurance that their exports are free from metal contaminants in order for export permits to be approved.”

Examples of measures to ensure this are metal detection and X-ray screening, she added.

FairPrice said its move to halt the imports is a precautionary measure as the authorities here have not issued any recall of strawberries from Australia.

“Australian strawberries from previous batches of imports remain available on our shelves but will not be replenished when they are sold out,” said its spokesman.

She said FairPrice also sources its strawberries from other countries.

Last Saturday, The Straits Times reported that a local market, Mahota, had removed all strawberries from its shelves after a metal piece was allegedly found in a pack of the fruit reportedly bought from the store.

The crisis has led to plunging sales in Australia and forced growers to dump millions of strawberries.

According to Business Insider, within the past few days, one younger person has been arrested in regards to these attacks. We do not yet know how this younger person will be dealt with or how many more people are out there doing things of the sort. For more information please feel free to check out the video below.

(Image Via: The Australian)