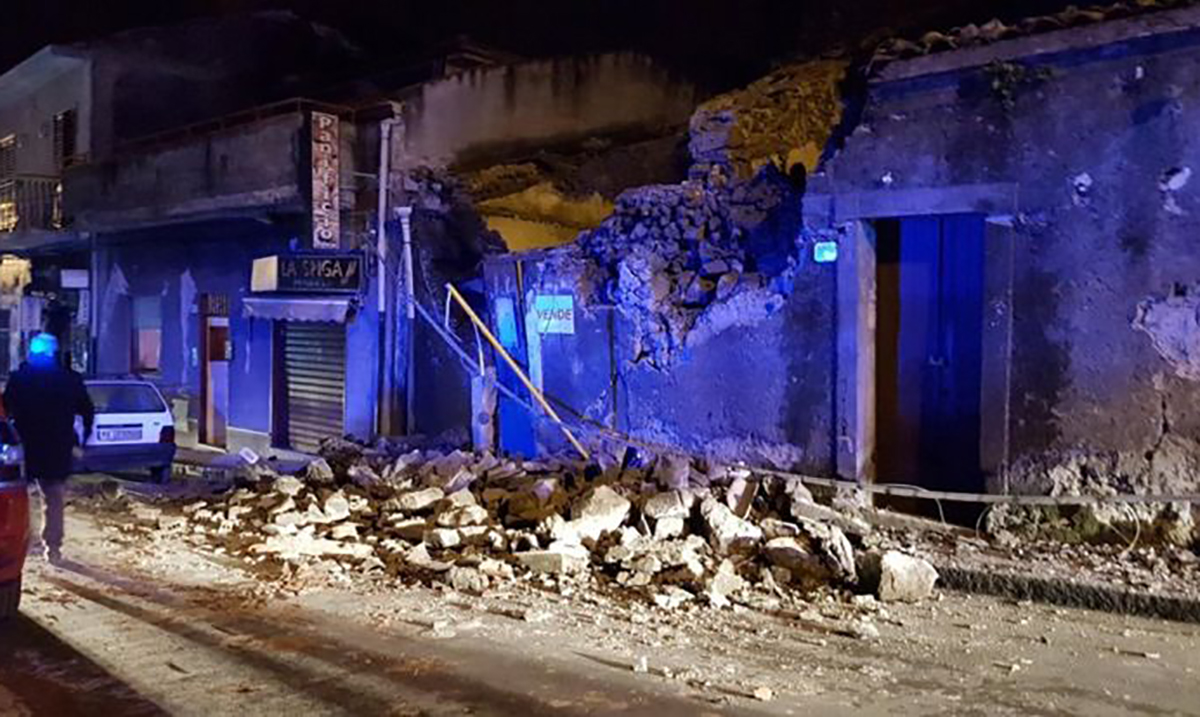 On Wednesday, in the early hours before dawn (December 26th) something terrifying occurred. The ongoing eruption by Mount Etna triggered an earthquake that hit Italy.

This earthquake was part of a swarm of about 1000 tremors. This quake struck north of Catania and jolted Sicily around three am. This damaged homes, churches, and injured at least ten people. Villagers were quite frightened and many are still in shock.

According to Vito Crimi the government undersecretary in the area told Fox News as follows:

“Etna remains a dangerous volcano, and this country of ours is unfortunately fragile.”

Considering how active Italy’s volcanoes have been these days it is something that they are having to pay close attention to. While few were injured this time, it is something that could happen again. Officials are keeping a close eye on things currently, and we can only hope that those affected are able to get back to normal soon. Thankfully no deaths have been reported at the moment.

An #earthquake magnitude 4.9 has struck Southern Italy (Sicily) last night at 03:19 local time near Catania city. The earthquake is linked to the volcanic activity of #Etna. At the moment there are 10 injuried, many damaged houses and a closed highway. #Italy #Terremoto pic.twitter.com/XBuIRwHn8V

According to The Guardian, this quake was the biggest since the volcano came to life again just days ago. It was a 4.8 and was 1km deep. The most serious injury noted thus far was a 70-year-old man who fractured ribs and was forced into surgery for his chest injuries.

Associated Press reported as follows on the unfortunate event:

One 80-year-old man was safely extracted from the rubble of his home, ANSA said, while a woman told state radio that her sister was pulled out from under a heavy armoire that had toppled. A ceiling collapsed in another house, and in other homes parts of exterior walls crumbled. Some stone walls along fields and local roads crumbled.

Etna, the largest of Italy’s three active volcanoes, has been particularly active since July. In recent days, Etna’s latest eruption has been shooting volcanic ash, heavy smoke, and lava stones into the air, coating roads and homes nearby with ash. A new fracture has opened near Etna’s southeast crater and lava has been flowing down an uninhabited slope.

The quake was also felt in the upscale Sicilian resort town of Taormina and in other towns in eastern Sicily.

The Civil Protection agency said temporary shelters were being set up in gyms or municipal buildings for people whose houses were damaged or who were too frightened to return to their homes.

Incredible pictures capture the #Etna Volcano erupting from the southeast crater, spewing lava and columns of gas into the night sky in #Catania, #Italy pic.twitter.com/UsmDEvf0X6

To see some of the damage this earthquake has done please check out the video below. Please keep those affected in your mind and if you’re in the area please stay safe. When it comes to volcanic activity, there are tons of other dangerous things that can come forth. Sadly, earthquakes and eruptions go hand in hand.