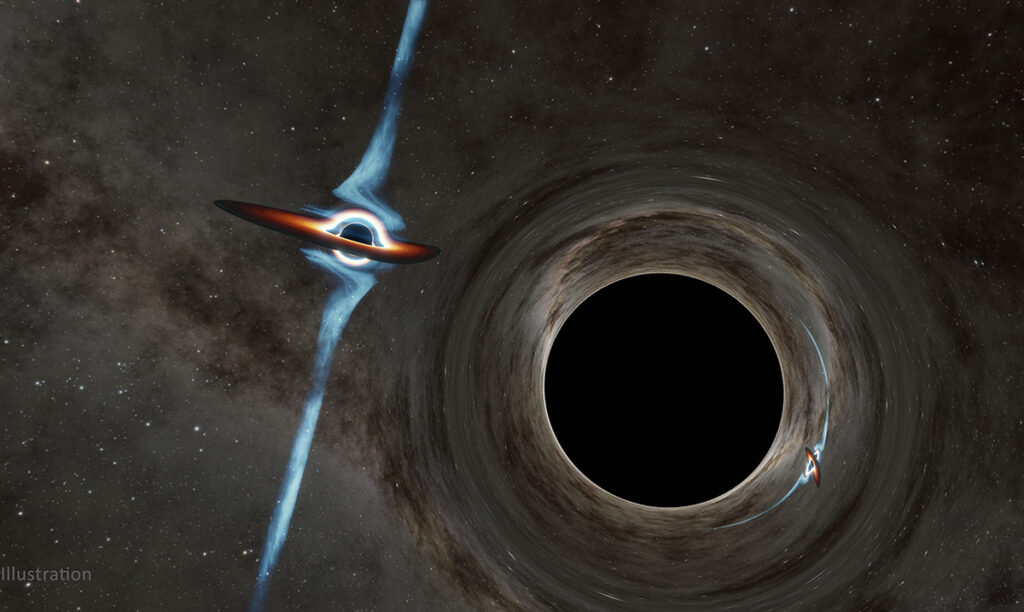 Based on the theory of relativity, upon colliding, the event will create ripples in space through gravitational waves. This pair of black holes can be found 89 million light-years away in the constellation of Aquarius. Currently, they are merely 1,600 light-years apart. Dr. Karina Voggel, who works at the Strasbourg Observatory in France says, “It is the first time we find two supermassive black holes that are this close to each other, less than half the separation of the previous record holder,”

“The small separation and velocity of the two black holes indicate that they will merge into one monster black hole, probably within the next 250 million years,” added her co-author Holger Baumgardt, who is a professor at the University of Queensland, Australia.

Of the two black holes, the larger of the two has a mass 154 million times of the Sun. Its location is in the core of NGC 7727, which is the name of its galaxy.

The researchers who have been observing it believe that it is at 99% of the way to a violent collision, which will likely rock the fabric of space-time, according to Live Science.

The blackholes share the name PKS 2131-021 and have been steadily moving closer and closer for a long time. In a statement from NASA, they explain that they share a binary orbit, which results in them orbiting one another every two years.

While we won’t live to see the collision, which will take place in 10,000 years, it will most definitely be intense. The research behind this discovery has been published in the Astrophysical Journal Letters.

Due to the orbital motion of the pair, there is a powerful jet coming from one of the two, which has affected the quasar’s radio-light brightness. This has been recorded on five different occasions, from five different observatories.

Black holes are some of the most mysterious objects in the known universe because they are parts of space where matter has collapsed on itself. Due to the gravitational pull of this, nothing is able to escape, not even light.

“Our finding implies that there might be many more of these relics of galaxy mergers out there, and they may contain many hidden massive black holes that still wait to be found. It could increase the total number of supermassive black holes known in the local Universe by 30 percent,” explains Voggel.