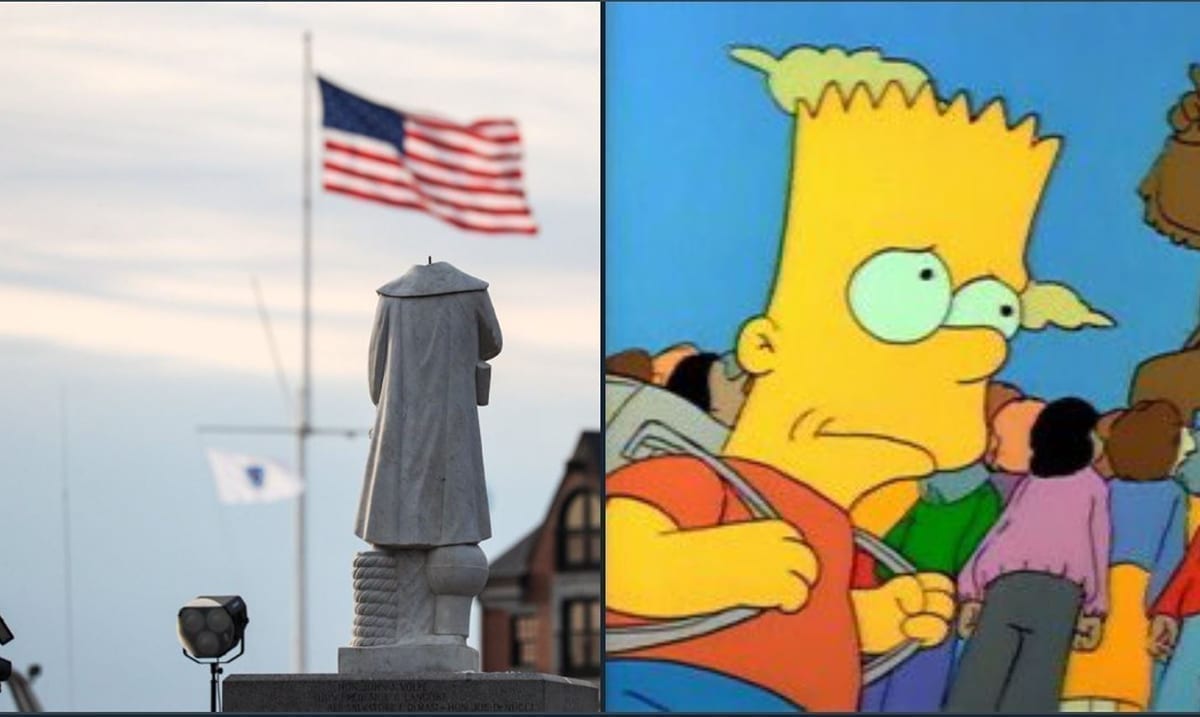 Throughout the years we have seen a lot of eerily similar things happen in real life that have happened on the popular cartoon ‘The Simpsons.’ This seems to be one of those situations and if you’ve seen this episode of the Simpsons I’m sure you’ve also put two and two together by now.

Recently as the Black Lives Matter movement has been gaining more and more traction and awareness, statues of slave owners and other things of the sort have been removed/big topics. A statue of Christopher Columbus actually had its head removed in Boston and since news of this has been making rounds, people are noticing that something like this happened on the Simpsons as well.

In season 1 episode 8 Bart Simpson cuts off the head of the town’s (Springfield) founder Jebediah Springfield. While a bit different it is quite similar as Christopher Columbus ‘found’ America. People all over the internet have been pointing this out and comparing the two situations with photos which honestly really are quite interesting. In the past we’ve seen the Simpsons seemingly predict tons of things and well, who knows what more we may see in the future that lines up with the show itself.

wasnt this a simpsons episode https://t.co/gvFQVuN1OP

Now, in the episode of the Simpsons Bart feels bad about what he’s done and really didn’t have much reason behind it which is very different from the things going on in the world right now but this coincidence in itself is pretty interesting to point out. There is clearly a reason as to why this is going viral. A lot of people who see news of this Christopher Columbus beheaded seem to connect these dots as the Simpsons is quite popular and even if you aren’t watching it currently chances are you’ve at least seen the first few seasons in the past.

The Simpsons show has also throughout the years seemingly predicted things like the coming age of smartwatches, Donald Trump’s presidency, and so much more. There are actually people out there who look to this show for possible things of the future as well, as time passes it seems much less outlandish than it sounds. As you can see in the Tweets above and below, this is something a lot of people are picking up on.

i’m convinced The Simpsons will predict everything correctly. They predicted the statue of Christopher Columbus being decapitated 👀 pic.twitter.com/KtF4aNH2Hn

While bringing The Simpsons into the mix does lighten the mood a bit and throw humor into things but there is no denying the issues before us. With so much violence going on and coming from all sides at the moment, we don’t know how the issues at hand will play out. Through all of this, messages are being lost and that we should keep in mind moving forth. Did this statue losing its head bring back memories from The Simpsons for you like it seems to have done for so many?