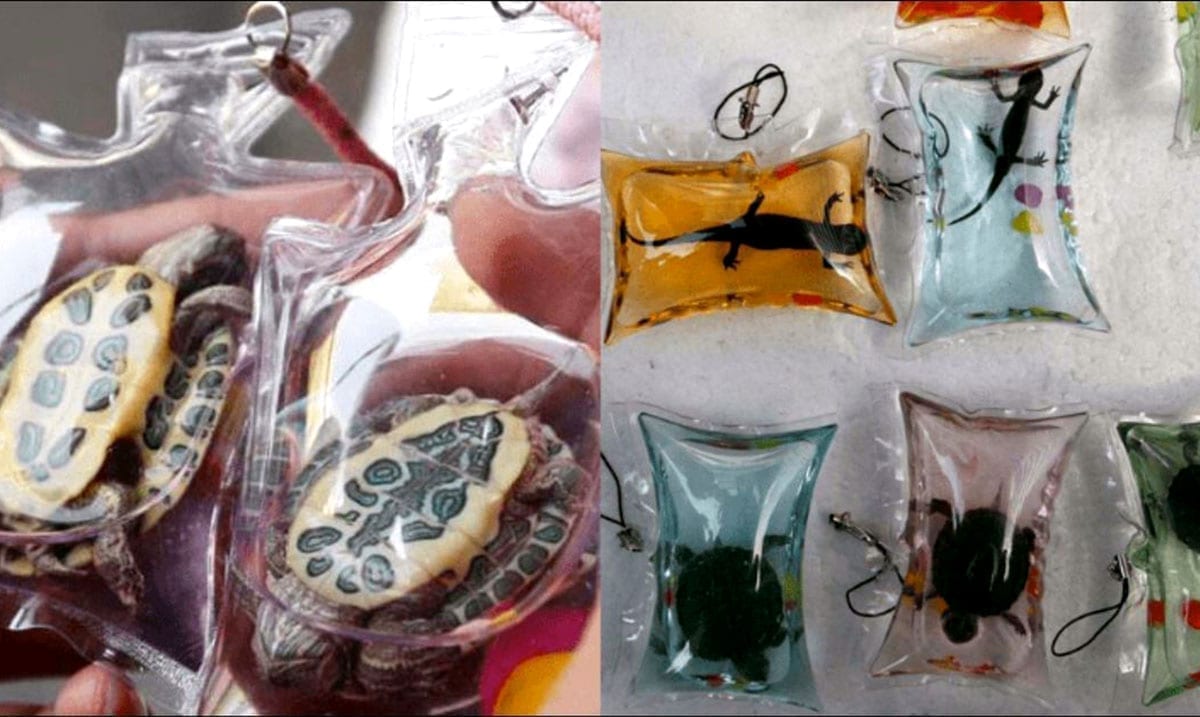 For a while several years back news of this barbaric practice was making its rounds but for some reason, nothing has been done about it. Small animals like turtles, salamanders, and even fish are locked inside of ‘keychains’ and sold for a small price to anyone willing to buy them in China.

CNN reported on this back in 2011 but since their article has disappeared. As you can see in the images below, they are tiny containers and within them are some of the cutest animals who seem to really be suffering. These keychains are cruel and if you don’t cut the animals out of these containers they will ultimately die inside of them as they only hold enough air and nutrients inside to remain living for a few days.

According to Snopes, these keychains went viral sometime in 2012 and many tried hard to get traditional media to pick up the story so that something could be done to save these creatures but still even now in 2020 it doesn’t seem like anything has changed. While we do not know how many of these are sold in China or if they’re as common as they are made out to be but there is no denying that they are present on some level and that the practice itself is heartbreakingly cruel and should not be happening. This so-called ‘fad’ is something that should have been nipped in the rear end quickly and yet, has not been. 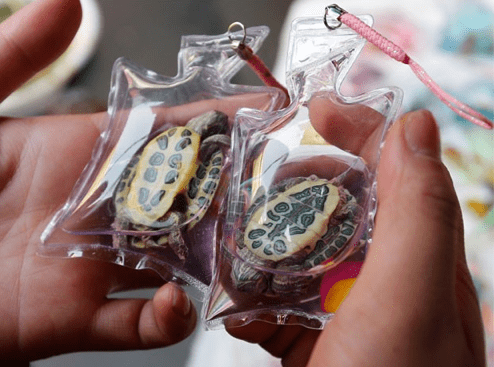 There have been several petitions going around over the years but there is one currently present on Change.org that is still getting signatures even now. It was created 4 years ago and has over 900 thousand supporters so far. That being said, the goal is one million. While it might not sound like much, these small creatures do not have voices of their own, and they need someone to speak out for them.

On the streets of China, live animals such as turtles and lizards are sealed in plastic bags filled with colored liquid and sold as keychains and mobile phone charms. Treated as objects rather than living beings, the animals endure extreme confinement — and usually, suffocation and death — for a few moments of human enjoyment.

One seller of live animal keychains told CNN that the pouches contain “crystallized oxygen and nutrients.” But animal advocates counter this claim, asserting that lack of sustenance and oxygen deprivation quickly kill the animals. And frankly, it doesn’t take an expert to realize that an animal will not live long in a plastic bag.

Some compassionate people may free the animals from their plastic tomb and keep them as pets — but these people could face serious health risks. Turtles, for example, are known carriers of Salmonella, a dangerous bacteria.

No matter how you look at it, the practice of forcing live animals into keychains is simply cruel. Unfortunately, in China there are no animal welfare laws preventing this outrageous treatment of living creatures. These animals are subjected to a slow death by suffocation in a watery grave.

Sign now to send a message to Cui Tiankai, Chinese Ambassador to the United States, urging him to help put a stop to this atrocious practice. Let the government of China know that this treatment of living, sentient beings will not stand with the rest of the world.

If you’re still not quite convinced that this is happening please stop for a moment and let the video below really sink in. These ‘trinkets’ are not just toys, they are living breathing animals, and they deserve a life outside of these bags and to remain thriving properly. Could you imagine being a turtle or something else of the sort and this being your fate? How is this still happening in 2020?