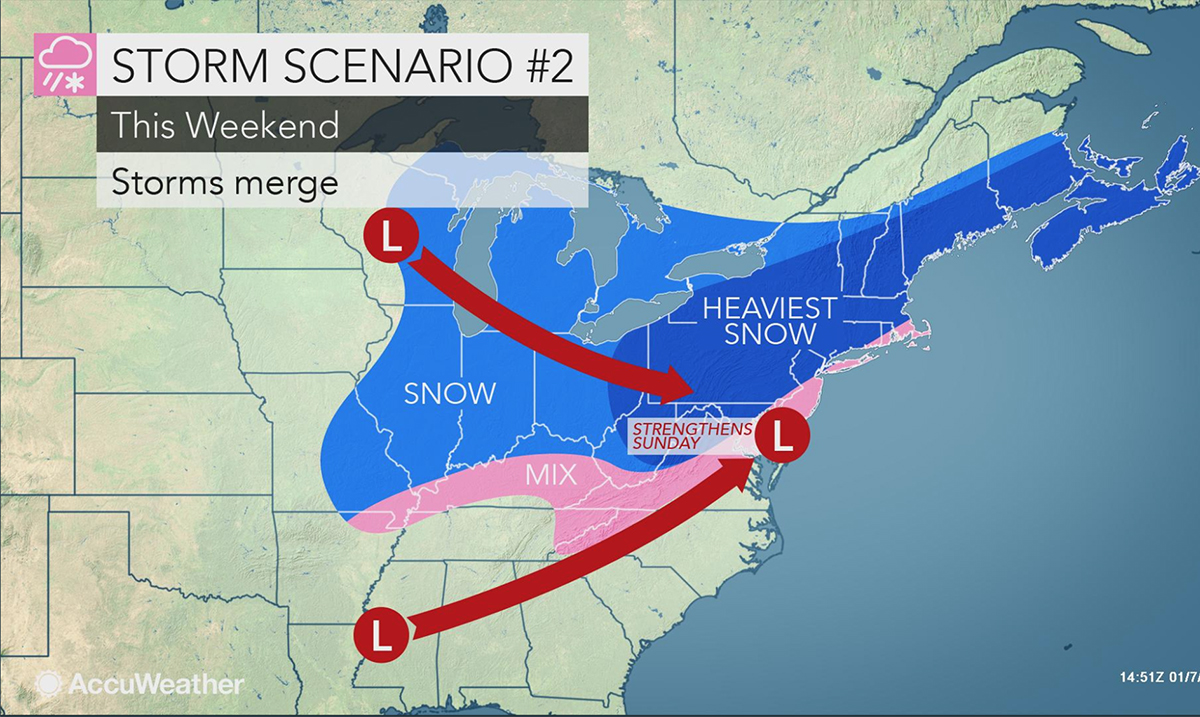 By Gerald Sinclair January 10, 2019 No Comments

There is a snowstorm well on its way and while it has weakened it could bring a foot of snow. If you’ve been enjoying the season as it has been this could really mix things up for you.

According to Accuweather’s senior meteorologist Brett Anderson, there are two centers associated with this storm in particular. People from North Carolina to Virginia are to expect a long-duration storm. It has also been noted that several inches of snow are in the forecast for from Missouri to Ohio during the first part of the weekend to come.

A cold shot may last long enough for a weekend storm to unload snow & a wintry mix across portions of the Ohio Valley, South and Northeast: https://t.co/EE5iLjyYF5 pic.twitter.com/J2LuQAZ2m3

Accuweather reported as follows in regards to this storm taking serious aim at part of the South:

“No matter how strong the storm becomes or exactly where it tracks, it looks like a wedge of cold air will get stuck in parts of the Carolinas and Virginia and allow the storm to bring at least some snow and ice,” according to AccuWeather Meteorologist Maggie Samuhel.

This storm is not likely to bring the amount of snow that the storm from Dec. 9 did in the South when 1-2 feet of snow piled up in some locations.

However, several inches to a foot of snow is likely to fall from northwestern North Carolina to western and central Virginia and southern and eastern West Virginia. This means that travel along much of Interstate 81, I-64 and I-77 in this zone may be difficult due to snow-covered roads.

People should expect enough snow to shovel and plow in Roanoke, Harrisonburg, and Winchester, Virginia; Charleston, West Virginia; and Hickory, North Carolina, with this storm.

It is possible that moderate to heavy snow extends to near I-64 in eastern Virginia, especially if a second burst of snow occurs as the coastal storm takes hold.

While we will not know how far North the storm will move until it is tracked further the areas affected have until now not received much ‘wintery weather.’ Anderson as mentioned above, also noted that if the two storms remain seemingly weak they will most likely remain separated as well. With that being said, we will at least face spotty snow and ice in several regions. As the storm could elevate to its full potential we could end up seeing a very harsh reality check in regards to how seriously cold winter can be.

Many areas are preparing for the weather to come and if you are in one of the locations mentioned above perhaps you should be one of those doing so. According to New Jersey 101.5, the wind has picked up and cold air has arrived. Showers there could begin as early as Saturday afternoon. To hear more on this topic please check out the video below. While snow is fun to some it is still something we all need to be aware of. Could there be a dramatic difference across the states affected? I guess this weekend we will find out.