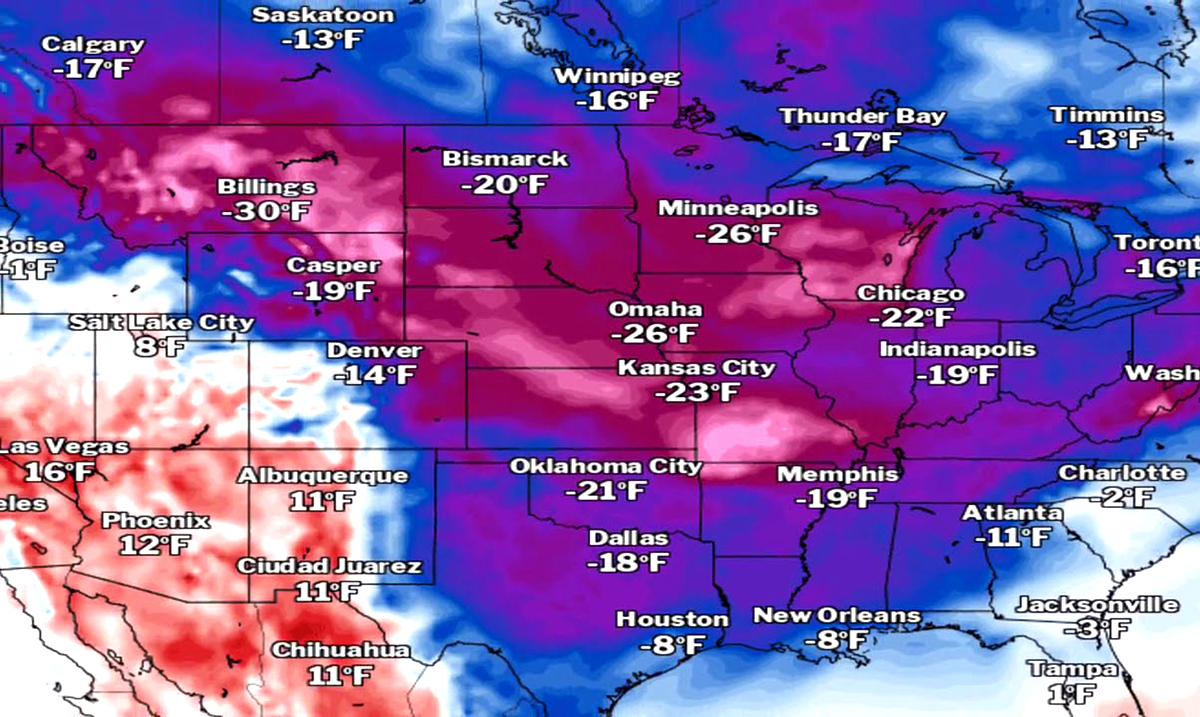 A Brutal Arctic Air Mass To Take Over The United States

Things were starting to warm up for most of the United States throughout last week, but for those hoping it would last into the weekend, I have some bad news. Temperatures are expected to be as much as 30 to 50 degrees below normal.

Although many Americans hope for warmer weather as we get into March, that is simply not the case. Throughout the weekend brutal temperatures are going to overtake the central portion of the country, from the Mexican to Canadian borders.

Currently, things are very cold in the northern Rockies, Plains, Midwest, and Northeast, temperatures are expected to drop by as much as 20 degrees below 0 in some places. This is thanks to the arctic air mass, which could continue well into the second week of March.

A major winter storm will impact much of the country this weekend. The storm will cross California to the Rockies Saturday with heavy low elevation rain and heavy mountain snow. The storm quickly shifts across the eastern states Sunday with heavy snow, heavy rain & severe storms. pic.twitter.com/moOLBm9HYE

According to Fox News, This cold is due to a “block jet-stream pattern in the Arctic.” A high-pressure area from the Gulf of Alaska will push the cold air southward into the rest of the country.

Subtropical jet stream cirrus incoming >> weekend #storm coming with heavy #rain, #severe thunderstorms, and a long swath of #snow as an #arctic air mass comes in from the north pic.twitter.com/e46bw9d9ng

It is expected to be the coldest in Montana, Minnesota and the Dakotas. The National Weather Service in Glasgow, Mont., warned that people may experience symptoms of frostbite in 10 minutes and wind chills could “dip into the minus-50s by Sunday morning.”

Subzero temperatures are anticipated as far south as Colorado, Kansas, Iowa, Illinois and even into Texas. By Tuesday, highs are expected to hover in the teens, except around freezing in the corridor from Washington to New York.

A major winter #storm will race from the West Coast to East Coast this #weekend and one of the hazards will be heavy snowfall. Here are the probabilities of greater than 4 inches of #snow for the next 2 days. Are you in the path of the storm and #weather #ready? pic.twitter.com/qmbFiEaUBy

An arctic air mass overtaking the whole country is not too common, mostly because the Rockies actually act as a blocking mechanism. The National Weather Service urged residents to stay indoors this weekend as the arctic air mass hits the areas bringing the “dangerously cold wind chills.”