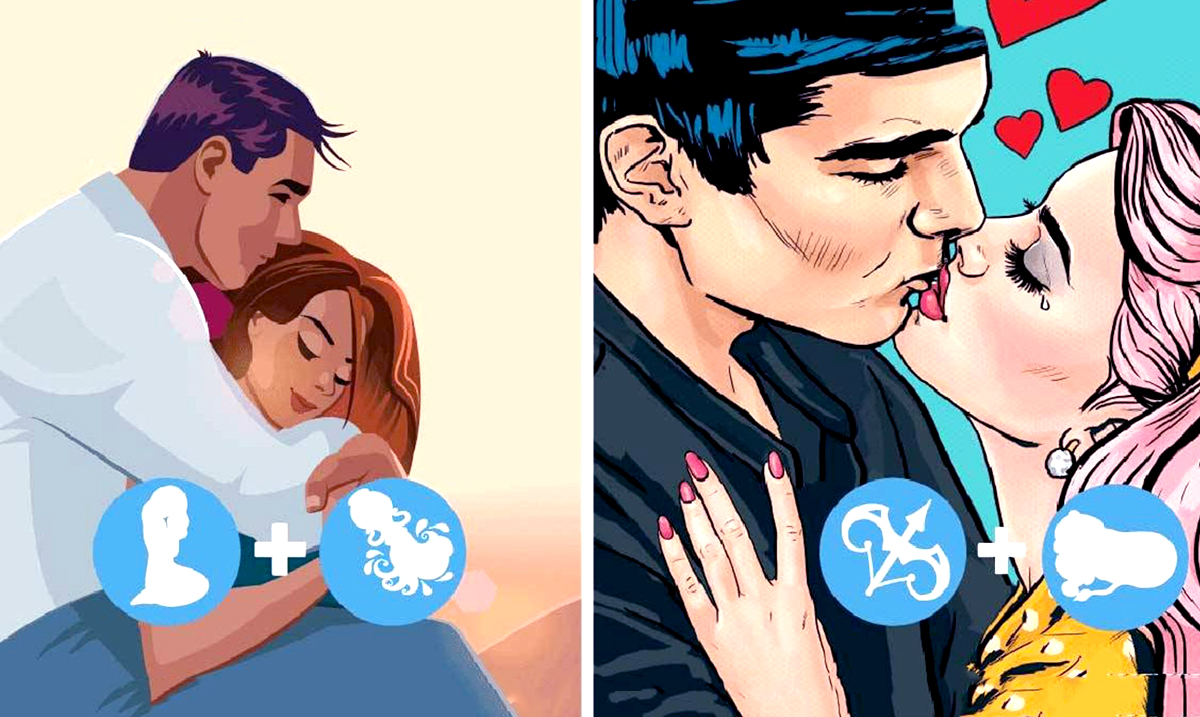 While there are tons of different couples that can present themselves within the zodiac, not all of them are as strong or positive as others may be. The more you look to the stars the more you will learn about yourself and the person you’re with, sometimes signs just don’t mix and there are lots of reasons for that.

Sure, they might not sound like good matches right off the bat, but when you break things down their connections are much deeper than you’d think. These zodiac couples are some of the most powerful and most likely to stand the tests of time. Do you and your partner fall into any of these pairings?

Together, these two signs tend to have quite the connection. They are able to communicate well with each other without having to let go of their independence. Both of these signs are very energetic and quite open-minded, they seriously get along extremely well.

They hold an intellectual bond like no other and are able to really open up to one another. Even though the Aquarius can be stubborn they still do their best to understand one another. You won’t catch these two slacking when it comes to their relationship with one another.

These are two of the most emotional signs of the zodiac, but together they compliment each other in way unlike any other. They are both very passionate and strong signs, but because they are both very family-oriented they are able to keep one another’s well-being in mind always. Both are water signs, and they both bring a sense of intimidation to the table that most other relationships forget is important.

When these two argue they get through the problem quickly and work things out. Everything that comes up seems to boil over quite easily. You just can’t beat a connection like this one.

When these two signs come together they bring a very sensible relationship to the table. They are both very down to earth and do their best to remain stable. They admire one another and always work towards stepping into the future on a realistic note.

Sure, they have their differences, but they are able to achieve so much with one another. Because they are on the same page when it comes to their values they are a match made to last. You won’t see them bringing one another down, ever.

When these two signs come together they really even each other out. The Virgo is much more practical but the Pisces brings a sense of creativity to the table that otherwise would not be present. Their relationship is a very healthy one, and they make up for one another’s lackings, big time.

When these two signs come together they can be quite frustrated with one another, but they also have a serious connection like nothing else. They put peace and comfort on a pedestal and do their best to really get along with one another. Together these two are very growth-oriented and always ready for action.

While they do disagree on some things they lead one another on the right life path. The Libra reminds the Aries to slow down and the Aries keeps the Libra grounded out. Everything works out in the end with this zodiac couple.

When these two signs come together they are far more intimate than most other couples. They are warm and loving in ways that many couples are not capable of. Together they make up one of the most positive connections within the zodiac.

While the Sagittarius is usually a very flighty sign, the Leo provides him or her with the self-esteem and courage that he or she needs. This kind of relationship is far more passionate than most others. They really get one another.

When these two signs come together they are very comfortable with one another. They get along on a level that some struggle to accomplish. They both have so much in common but also have a lot of differences so that things never get boring. While they are not perfect and do argue from time to time, they do not have any trouble sitting down and talking things out.

When these two signs come together they bring about a very sensible partnership. They both do all that they can to remain stable on all possible levels. They don’t waste any time and are always working to build themselves up together.

The Capricorn will work to motivate the Taurus further and the Taurus will ground out the Capricorn properly. Both together bring a warm and open sense of love to the table that is necessary. They appreciate the same things and are able to seriously work well with one another.

The Virgo and Taurus go together well because emotionally they are on the same level. They build their trust in one another slowly and don’t jump into things too quickly. They have similar values and know how important compromise is. While they might not have a lot of things in common they are able to appreciate one another in more ways than you would think.

The Sagittarius and Aries are able to really cut up with one another and have a good laugh. They go together well because they are able to tell what the other is thinking. If you know anything about either of these signs you know that both of them can spot a liar from a mile away. While they may disagree from time to time they are emotionally intelligent and talk things out quickly. Unless one partner refuses to tell the truth about something for some reason this is a match made in Heaven.

Both of these signs are somewhat social butterflies. They go together well because they bring light from within one another. They both are capable of speaking and listening which is not something you find in many people these days. While overcoming some trust issues might be hard for them they are more than capable of it. They do not judge one another and respect each other more so than most other signs do.

The only downside to these two signs being together is their confusion in the bedroom. While sometimes it is easy for them to get on the same page sometimes it can be complicated at best. They trust one another and have a bond that is hard to break but to most people on the outside looking in you might assume their relationship is ‘boring.’ Because they respect one another and are able to agree to disagree they are a perfect couple.

Pisces and cancer work well together because the Cancer gives the Pisces what he or she lacks. They are able to get along well and both like to stay in more often than not. Their sexual experiences with one another are for the most part overwhelmingly positive and deeply intimate. Any arguments they have are usually squashed quickly, and they bring forth a lot of change for one another and grow together.