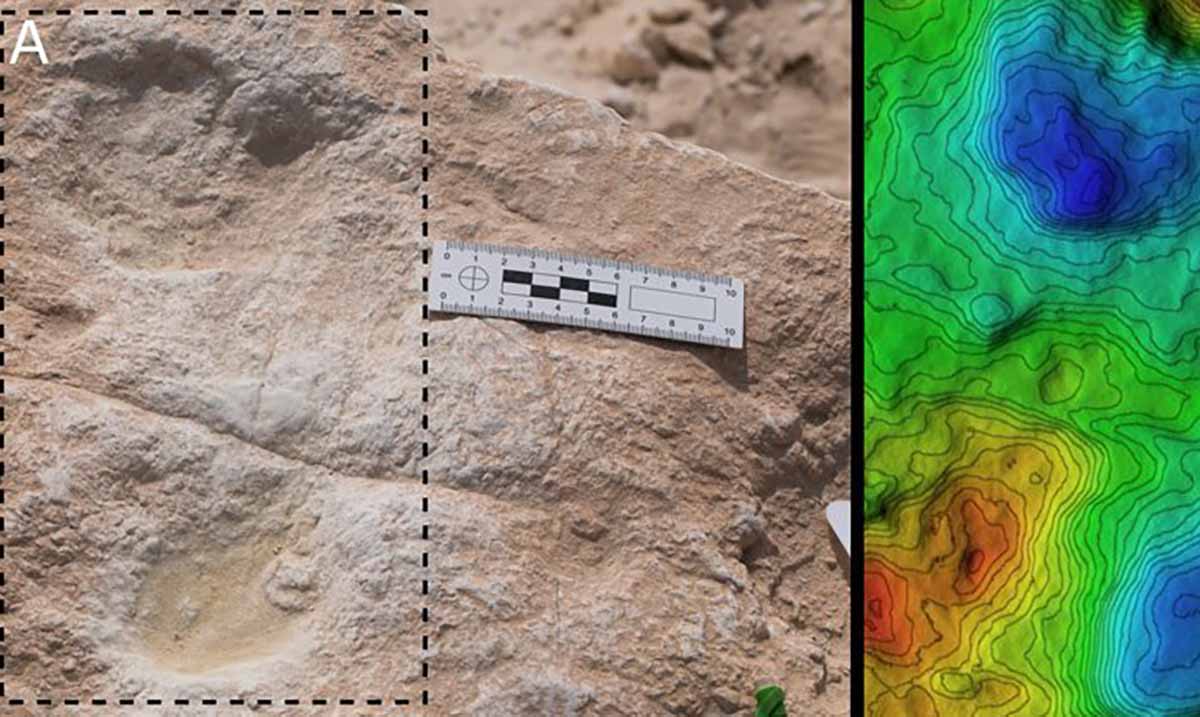 While we don’t know as much as we would like to know about ancient people, as time passes we’re learning more and more. Actually, a study that was published not too long ago highlights a lot of things that for a long time were seemingly unknown.

This study published in Science Advances goes over the finding of fossilized footprints that were discovered in an ancient lake deposit that happens to be in Saudi Arabia. This around the Nefud Desert and after diving into things it was found that these footprints are at the very least about 120,000 years old. While some are animal footprints, others belong to humans. Yes, actual Homo sapiens.

As Eureka Alert has noted this is easily the first representation of the earliest dated evidence of human movement in this part of the world. I know, that might sound like a lot but stay with me. Sure, we know that humans are all over the world now but how they got to where they are in some cases is quite the mystery and this in itself could be the key to figuring out the area at hand in some ways.

Eureka Alert wrote as follows going over these findings:

The footprints described in the new study were discovered during a recent survey of the Nefud Desert in Saudi Arabia. At an ancient lake deposit dubbed ‘Alathar’ (meaning “the trace” in Arabic) by the team, hundreds of human and animal footprints were discovered embedded in the surface, having been exposed following the erosion of overlying sediments.

“We immediately realized the potential of these findings,” says Mathew Stewart of MPI-CE, one of the study’s lead authors. “Footprints are a unique form of fossil evidence in that they provide snapshots in time, typically representing a few hours or days, a resolution we tend not get from other records.”

Researchers were able to identify a number of animals from the footprints, including elephants, horses, and camels. The presence of elephants was particularly notable, as these large animals appear to have gone locally extinct in the Levant by around 400 thousand-years-ago.

“The presence of large animals such as elephants and hippos, together with open grasslands and large water resources, may have made northern Arabia a particularly attractive place to humans moving between Africa and Eurasia,” says Michael Petraglia of MPI-SHH, who has been conducting research in the region for over a decade.

The dense concentration of footprints and evidence from the lake sediments suggests that animals may have been congregating around the lake in response to dry conditions and diminishing water supplies. Humans, too, may have been utilizing the lake for water and the surrounding area for foraging.

“We know people visited the lake, but the lack of stone tools or evidence of the use of animal carcasses suggests that their visit to the lake was only brief,” says Stewart. Human movements and landscape use patterns, therefore, may have been closely linked to the large animals they shared the area with.

The age of the footprints is of particular interest. They date to a period known as the last interglacial, a time of relatively humid conditions across the region and an important moment in human prehistory. Environmental changes during the last interglacial would have allowed humans and animals to disperse across otherwise desert regions, which normally acted as major barriers to dispersal during the less humid periods. Fossil and archaeological records indicate that these conditions also facilitated human dispersal from Africa into the Levant.

“It is only after the last interglacial with the return of cooler conditions that we have definitive evidence for Neanderthals moving into the region,” says Stewart. “The footprints, therefore, most likely represent humans, or Homo sapiens.”

These findings suggest that human movements beyond Africa during the last interglacial extended into northern Arabia, highlighting the importance of Arabia for the study of human prehistory.

According to Science Mag, these footprints were likely made by people with ‘longer feet, taller stature, and smaller mass.’ This suggesting they are homo sapiens rather than neanderthals. Using something known as optically stimulated luminescence, dating these footprints really puts things into perspective. At the date, these footprints are said to have been made initially neanderthals were absent from the Middle East as a whole and so being able to come to the conclusion that Homo sapiens were the ones who made them is a much larger find than most would like to admit.

A lot rests on the dates, however. Geochronologist Bert Roberts of the University of Wollongong notes some uncertainties with dating methods at the site—including older ages for animal fossils and potential issues with calculating the precise rate of decay of uranium in the sediments. The dates for the footprints “might be in the right ballpark,” he says, “but more could be done to validate them.”

The team can’t entirely exclude Neanderthals, says paleoanthropologist Marta Mirazón Lahr of the University of Cambridge, because the fossil record is so spotty in Arabia. But she thinks H. sapiens is the more likely candidate.

Even more intriguing, she notes, the footprints show the humans were capable of moving long distances between Africa and Arabia and must have had fairly large foraging parties to have been able to penetrate deep into the rich interior wetlands of Arabia.

The rare association of human and animal footprints laid down in the same day or so also offers a rare glimpse of a day in the life of an ancient human. Usually, animal and human fossils found in the same fossil bed were buried hundreds, if not thousands, of years apart and never laid eyes on each other. “These footprints give us a unique snapshot of the humans living in this area at the same time as the animals,” says paleoanthropologist Kevin Hatala of Chatham University in Pittsburgh, an expert on ancient footprints. “That tight association in time is what’s so exciting to me.”

These people were likely visiting the lake itself as a water source and foraging all the whole. While more research will need to be done on all of this it is a step towards understanding things more properly. As time passes perhaps we will be able to learn more about the people who once were in the are and where they went from there.

What do you think about all of this? I for one find it to be truly fascinating. All in all, perhaps this could lead to something much bigger in time.