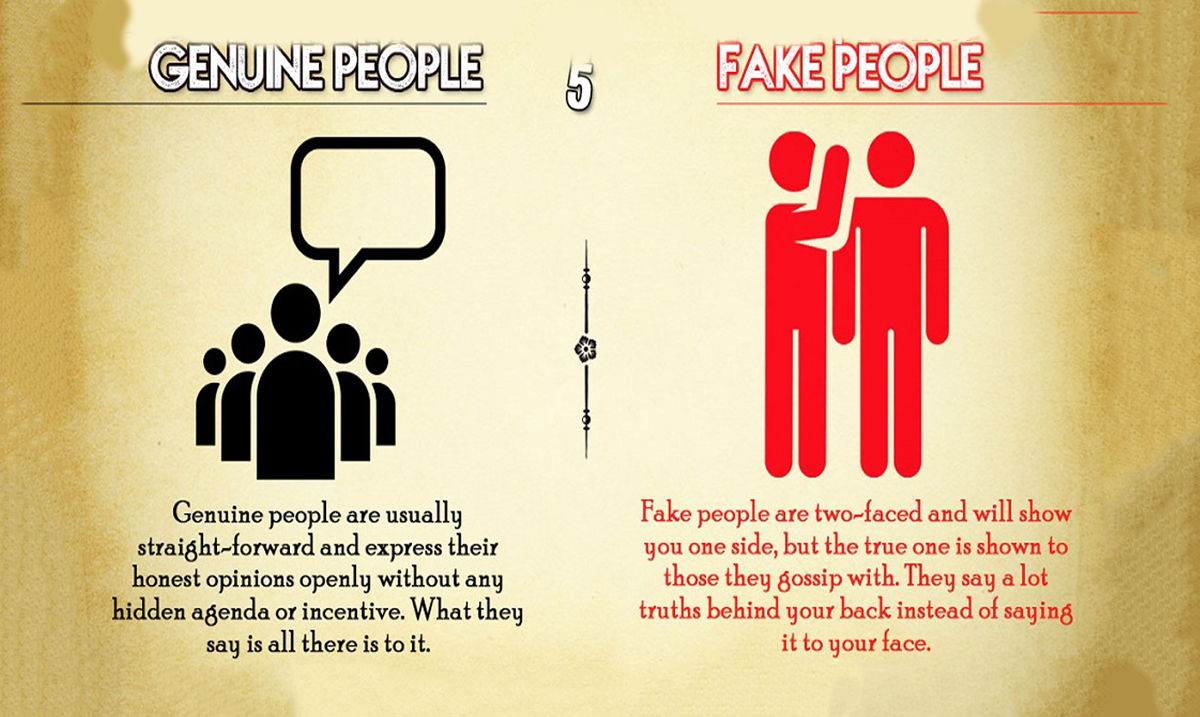 10 Differences Between Genuine and Fake People

By Debi AllisonMay 5, 2021No Comments

Have you ever been around people who talk bad about everyone behind their backs? These people are nice to your face but are about as fake as it gets.

Sometimes we have a hard time figuring out who is real and who is fake. That is not something to be ashamed of considering how full of wolves this world of sheep is. Below you will find ten easy to spot differences when it comes to genuine people and fake people.

10 Differences Between Genuine and Fake People

1. Hard To Impress Vs. Easy To Please

Genuine people won’t usually go out of their way to impress others. They are normally comfortable how they are and are not seeking the approval of others. Fake people, however, are always doing things to make them seem more favorable and are often hard to impress.

2. Look Out For Everyone Vs. Look Down On Everyone

Genuine people look out for others and are always doing what they can to help depending on the situation. Fake people are constantly trying to come off as better than everyone else and look down on almost everyone.

3. Help For the Sake of Helping Vs. Helping For Self Gain

4. Honest Opinion Vs. What You Want To Hear

Genuine people will give you their honest opinion on something even if it is something that is hard to tell you. Fake people will either lie to you to make you feel bad or tell you what you want to hear.

Genuine people will actually do their best and holds true to their promises. Fake people will be all talk and no action. They may say they are going to do something, but they never really will.

6. To The Face Vs. Behind Your Back

Genuine people will tell you how it is to your face and fake people will wait until you aren’t around to say it. They will be your best friend when you’re there and your enemy when you aren’t.

Fake people will show off everything that they can while the genuine person will not brag.

8. Good Enough As They Are Vs. Needs Recognition

Genuine people do not need recognition for the things that they do. Knowing they did something is good enough for them, but fake people will want people to know their accomplishments and never let those around them forget them.

9. Cleaning Up Other People’s Messes Vs. Making More Of A Mess

Genuine people (unless someone has gone too far) will often clean up after others be it in the physical world or emotional while the fake people will make the mess even worse on purpose.

10. Listening Vs. Pretending To Listen

A genuine person will listen to your problems and give you advice while a fake person will only listen if it is something juicy for them to pass along.